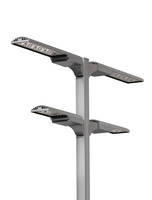 Linear EXT LED Arrays are available in five models ranging in length from 26 to 55 in. with 3000K, 4000K and 5000K color temperatures. Units come with nine distribution patterns and PLED optical modules that can be rotatable in 90° increments and field replaceable. PLED module’s each LED can be controlled individually by a lens. Units are offered with HLSW, TPR7 and MS-F211 dimming control options and six voltage types from 120V to 480V.

PALMDALE, CA - U.S. Architectural Lighting brings to market the Linear EXT, a site and roadway fixture with fully rotatable LED arrays that allow precise placement of light, regardless of the orientation of the luminaire. This new flexibility integrates a fixture’s aesthetics with a site’s optical needs.

In the PLED Module, each LED is individually controlled by a lens that has distribution type and direction of light throw molded into it. House side shielding is available and shields are applied to each LED to control light trespass. LED drivers are flush mounted with electrical housings for maximum heat dissipation.

At the recent Lightfair International trade show, U.S. Architectural Lighting also released Linear EXT Wall Mounts with arrays of 20 LEDs to 60 LEDs and a series of bollards with round and rectilinear risers.

U.S. Architectural Lighting is a leading manufacturer of outdoor lighting fixtures and has served the electrical industry for more than 34 years. All products are entirely manufactured in the U.S.A. to ensure consistent quality, ready inventory and timely shipping. www.usaltg.com