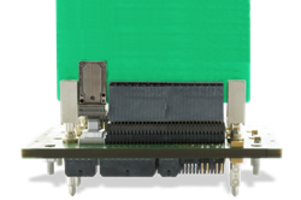 Reflex Photonics’ LightCONEX, The First 150 Gbps 24-lane Rugged Transceiver on The Market, to Power The Next Generation of 3U VPX Cards from Interface Concept

The backplane connector, also part of the LightCONEX solution, has a floating head mechanism that ensures optimal optical mating meeting VITA 66.0 requirements. The rugged construction of these connectors ensures error free data transmission over all 24 lanes under severe shock, vibration, and temperature extremes.

“We are very excited that Interface Concept has chosen the LightCONEX LC 150G to integrate in their new IC-FEP-VPX3f card. We believe these cards delivers the best performance/consumption ratio compared to other FPGA cards and the use Reflex Photonics’ LightCONEX LC 150G interconnects plays a good part in achieving this level of performance. This standard-compliant design has market-leading I/O density, offers the best “performance/cost per lane” ratio in the industry, satisfies the most stringent SWaP requirements, and opens up new opportunities to VPX card developers.”

Interface Concept is a leader in design and manufacturing of high-performance embedded boards and systems, aimed at ground, naval, air and industrial applications.