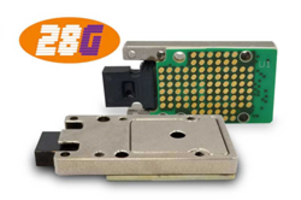 Reflex Photonics will conduct live demonstrations of its new LightABLE28™ and SpaceABLE28™ line of rugged and radiation resistant optical modules offering up to 28 Gbps per lane for defense and space applications at the upcoming Optical Networking and Communication Conference & Exhibition (OFC 2019).

The new LightABLE28 28G optical transceivers are intended for harsh environments where reliability is critical and the equipment is under constant stress over its operational life. All parts are qualified to MIL-STD-883J for vibration, thermal cycling, mechanical and thermal shock in addition to damp heat and cold storage, according to MIL-STD-202 and MIL-STD-810 respectively. This level of testing provides confidence that the 28G design withstands the aggressive effects of thermal cycling, moisture ingress, and other environmental conditions.

Reflex Photonics’ radiation-resistant or “Space-grade” SpaceABLE28 transceivers are engineered to withstand radiation doses >100 krad (Si) as per the European Cooperation for Space Standardization ECSS-Q-ST-60-15C. The qualification program of the SpaceABLE28 includes the following protocols:

“Once again, Reflex Photonics reaffirms its innovative approach and commitment to the defense and space industry by supplying very high communication density devices in a very compact, rugged, and radiation resistant package. The LightABLE28, SpaceABLE28, LightCONEX28, and SpaceCONEX28 use LGA mounting; this versatile electrical interface provides a solid screwable attachment to the host board and the interposer thickness is very flexible and can be adapted to fit numerous applications.”

You are invited to see a live demonstration of the 28G line of modules and other Reflex Photonics products such as the LightVISION industrial transceiver, and LightCONEX active blind mate interconnect for VPX systems, as well as SNAP12, QSFP, and CFP modules.