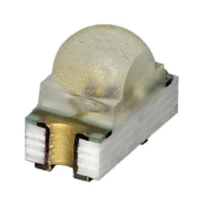 Fort Worth, Texas – May 6, 2021 – TTI, Inc., a leading specialty distributor of electronic components, is now offering the ROHM CSL0901/CSL0902 LED series. These compact, high-output, surface-mount LEDs are designed with molded lenses to optimize intensity. This new lineup includes 18 devices, comprised of the CSL0901 series and featuring standard brightness and the high brightness CSL0902 series. LEDs are optimized for uses in industrial, medical and automotive systems.

Recently, most backlighting designs have adopted shields to prevent light leakage from the LEDs to surrounding areas. However, light leakage remains a challenge due to a small amount of space that is required between the shield and the PCB to account for expansion caused by temperature changes. Additionally, some applications using LEDs, such as medical, automotive and industrial systems where electrical components are exposed to severe conditions, require high reliability from these components, so they can better withstand the effects of aging caused by the extreme environments they are exposed to.

In response, ROHM has taken a step ahead in the industry to develop the CSL0901/CSL0902 products targeting applications that require high reliability at the component level, such as developing the first high-brightness, silver-free LEDs to prevent sulfuration, which is one of the leading causes of aging.

TTI, Inc., a Berkshire Hathaway company, is an authorized, specialty distributor of electronic components. Founded in 1971, the emphasis on a broad and deep product portfolio, available-to-sell inventory and sophisticated supply chain programs have established TTI as a distributor of choice to manufacturers in the industrial, defense, aerospace, transportation, medical, and communications sectors worldwide. TTI and its wholly owned subsidiaries, the TTI Family of Businesses, Mouser Electronics, Sager Electronics and TTI Semiconductor Group employ over 7,300 people in more than 136 locations throughout North America, South America, Europe, Asia and Africa. Globally, the company maintains over 3 million square feet of dedicated warehouse space in 30 distribution centers, housing over 850,000 component part numbers. For more information about TTI, visit www.tti.com