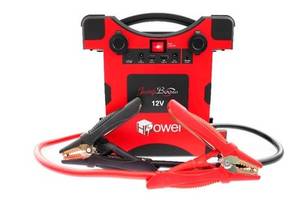 The 12 V JUMPBOOSTER JP30 Jump Starter Battery is designed for heavy duty diesel trucks. The product comes with two cigarette-lighter ports, two USB ports, an extra-bright LED flashlight and built-in smart cables. It can be used for recharging laptop, phone, tablet or other electronic device. The jump starter is offered with features such as reverse polarity, low-voltage protection, short circuit overheat protection and over-discharge protection and delivers up to 5,000 starts.

Dead batteries are a huge issue in the trucking industry, causing expense, delays and lost opportunities. But now, thanks to the revolutionary new JUMPBOOSTER JP30 from LithiumHub, those worries are a thing of the past.

"The JUMPBOOSTER JP30 is the most powerful, smallest, lightest and best value lithium-ion jumpstarter on the market that can INSTANTLY jumpstart your heavy-duty diesel equipment up to 16L," says Martin Koebler, President of LithiumHub. The unit is so powerful, weighing only 11lbs, it can even start a heavy-duty diesel truck with no lead acid batteries connected.

The compact jump-starter device produces a full 3,000 peak cranking amps, more than enough to start any diesel truck engine up to 16 liters in displacement. Safe, efficient and easy to use, the JUMPBOOSTER JP30 truly is a game changer for over-the-road truck drivers.

Instead of having to roll out an unwieldy 350+ pound lead-acid battery cart to start a dead battery in a big rig — often in inclement weather — the JUMPBOOSTER JP30 weighs 11 pounds. The JUMPBOOSTER JP30 unit performs and exceeds past what's advertised in a compact, easy-to-use package. It offers increased safety because it's so easy to use. It does give a 'wow' factor for our customers.

"I don't know of any shop anywhere that would want to be without one of these if their business is repairing trucks," says Barry Lovell, Director of Parts Operations for McCandless Truck Center "There is no other product out there like the JUMPBOOSTER JP30."

The secret is JUMPBOOSTER JP30 high-output lithium-ion batteries, which use microchip technology to keep from ever overheating, while at the same time delivering the massive power truckers need. Just connect the JUMPBOOSTER JP30 to their truck's battery terminals, fire it up and drive away.

On top of the ample cranking power, the JUMPBOOSTER JP30 comes with a host of versatile and practical features, including two cigarette-lighter ports, two USB ports, an extra-bright LED flashlight and built-in smart cables. When it isn't being used for firing up an engine, the JUMPBOOSTER JP30 can be used to recharge a laptop, phone or tablet, and other electronic devices.

The JUMPBOOSTER JP30 has a seven-year lifespan and provides instantaneous power on demand. Over its lifetime, it can provide up to 5,000 starts. Safety features include reverse polarity, low-voltage protection, short circuit overheat protection and over-discharge protection.