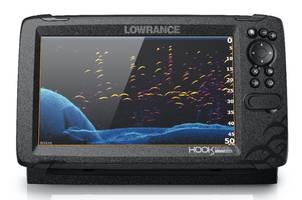 Tulsa, Okla. - Lowrance®, a world-leader in fishing electronics since 1957, announced today the launch of HOOK Reveal, the latest in the HOOK Series of fishfinder/chartplotters.

The all-new HOOK Reveal makes fishing easier, delivering powerful performance with proven fish-finding tools including, Autotuning Sonar, SideScan and DownScan Imaging™ and now FishReveal™, which makes fish easier to see by combining the benefits of Lowrance CHIRP sonar and DownScan Imaging on one screen. Whether fishing a local spot or unfamiliar water, find the best fishing areas with preloaded US Inland mapping or map uncharted water – in real time – with Genesis Live.

“HOOK Reveal brings a new level of fish-finding performance to the HOOK series. We are confident game-changing features like FishReveal and Genesis Live will help HOOK Reveal anglers have more success on the water.” - Knut Frostad, CEO, Navico

Available in 9-, 7- and 5-inch models, HOOK Reveal includes one of Lowrance’s most popular features, FishReveal and its live-mapping solution, Genesis Live.

Anglers will have an easier time seeing fish with FishReveal, which combines on one screen the proven target separation of Lowrance CHIRP sonar and the high-resolution images of fish-holding structure from DownScan Imaging.

Genesis Live gives anglers the capability to create custom 1⁄2-foot contour maps of their local lake or uncharted water – in real time – on the screen of HOOK Reveal displays. Genesis Live maps can also be created and saved on HOOK Reveal non-mapping GPS plotters by placing a blank microSD card into the card slot.

Ranging in price from $299 to $799, HOOK Reveal started shipping in late December 2019. For more information on HOOK Reveal or other Lowrance products, visit www.lowrance.com.