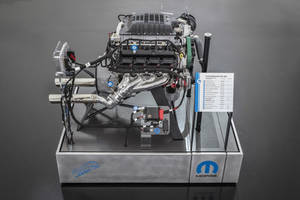 The Hellephant 426 Mopar Crate HEMI Engine turns the crank at a mammoth 1000 HP and 950 lb-ft of torque. The product features a 4.0 in. of stroke and bore specs at 4.125 in. The engine assembly consists of water pump, flywheel, front sump oil pan, supercharger with throttle body, fuel injectors and coil packs. The unit comes with valve covers that are imported from Dodge challenger SRT hellcat redeye and valve train.

'Hellephant' in the Room: Mopar Stampedes into SEMA with 1,000 Horsepower 426 Crate HEMI® Engine

The Mopar brand is stampeding into the 2018 Specialty Equipment Market Association (SEMA) Show with a brand-new HEMI®-engine-powered beast: the "Hellephant" 426 Supercharged Mopar Crate HEMI engine, which turns the crank at a mammoth 1,000 horsepower and 950 lb.-ft. of torque.

The "Hellephant" 426 Supercharged Mopar Crate HEMI engine is a Mopar-first for a 1,000 horsepower crate engine kit offered by an Original Equipment Manufacturer (OEM).

The press briefing today in the Mopar exhibit at SEMA also included the unveiling of the 1968 Dodge "Super Charger" Concept, the perfect package for highlighting the "Hellephant" 426 Supercharged Crate HEMI engine assembly and kit.

"Our enthusiasts crave power and performance, and our new 'Hellephant' Mopar Crate HEMI engine and kit deliver huge horsepower and torque in a plug-and-play package that is unique in the industry," said Steve Beahm, Head of Parts & Service (Mopar) and Passenger Car Brands, FCA - North America. "The 1968 Dodge Charger is one of the hottest classic cars, which is why we decided to use it as a starting point for the 'Super Charger' Concept. It's an amazing vehicle and a great showcase for our 'Hellephant' engine."

The "Hellephant" engine hits the magical 1,000 horsepower mark via bulked-up displacement, with 4.0 inches of stroke and bore specs at 4.125 inches. An improved supercharger with a high-efficiency rotor is mounted on the all-aluminum block, which provides huge weight savings to keep the "Hellephant" light. The all-aluminum block, used in Mopar Dodge Challenger Drag Pak race vehicles that dominated the 2018 NHRA Factory Stock Showdown class, was configured for the street in close collaboration with Mopar and SRT engineers from the motorsports world.

The engine and kit's distinctive "Hellephant" logo provides a nod to the Mopar brand's past and present. The logo and name call out the legendary 426 HEMI engine, first introduced in 1964 and nicknamed the "elephant" engine for its power and size, as well as the 707-horsepower Mopar "Hellcrate" Engine Kit, revealed last year at the 2017 SEMA Show.

As with the "Hellcrate" engine, Mopar will also offer an essential Front End Accessory Drive (FEAD) Kit, which includes an alternator, power-steering pump, belts, pulleys and more, and is among additional engine accessory hardware components available to assist in installing the "Hellephant."

The "Hellephant" 426 Supercharged Mopar Crate HEMI engine assembly and kit will be available in the first quarter of 2019. For more information, visit www.cratehemi.com, and follow Mopar on Twitter (@OfficialMopar) using the new #Hellephant hashtag.

1968 Dodge "Super Charger" Concept
The 1968 Dodge Charger, one of the most iconic vehicles ever built by FCA US, is reimagined with modern elements from the current Dodge Charger SRT and the Dodge Challenger SRT lineup to create a unique package for showcasing the Mopar brand's new "Hellephant" 426 Supercharged Mopar Crate HEMI engine and kit.

The 1968 Dodge "Super Charger" Concept is adapted to accommodate the "Hellephant" engine, enabling the classic ride to slam 1,000 horsepower to the pavement through a stock T-6060 manual six-speed Dodge Challenger SRT Hellcat transmission.

The custom "De Grigio" Grey Metallic classic 1968 Dodge Charger, which is marking its 50th anniversary in 2018, feeds the "Hellephant" fresh air through a supersized hood scoop modeled on that of the Dodge Challenger SRT Demon. The hood features fiberglass construction on the outside with inner-steel construction inside carried over from the original vehicle. The 1968 Charger's pop-up headlamp design is tweaked to plant Dodge Charger SRT Hellcat headlamps permanently behind the grille. The original's door handles and drip rails are shaved away, creating a clean, streamlined appearance. Front door vent windows are removed and replaced with a one-piece side glass. The 1971 Duster mirrors add a more modern appearance.

Custom fiberglass front and rear bumpers are flushed up and shortened cross-car to provide an integrated design. The custom fiberglass front chin splitter takes influence from the Demon, while the custom rear spoiler is inspired by the modern Charger R/T. The trunk key cylinder lock is shaved and the Satin Black fuel door embellished with a custom-milled aluminum "Hellephant" medallion, one of many unique design touches incorporated throughout the "Super Charger" Concept. Vehicle graphics and badging are Satin Black vinyl decals, including the "Hellephant" logo on the front fenders, "Super Charger" badging above the doors and classic tail stripes at the rear.

The Product Design Office (PDO) team let their imaginations run wild at the tail of the '68 Charger. The lower exhaust tips are eliminated and replaced with Alfa Romeo Stelvio 5-inch dual-walled exhaust tips re-engineered to run through the taillamp housing. The brake lights have been uniquely reconfigured with LED lights that glow around the exhaust tips.

Inside, door panels and interior trim are Satin Black with the unique "Hellephant" milled medallion applied on the upper door panels. The Dodge Viper steering wheel also carries the "Hellephant" medallion at its center. The instrument panel insert is "De Grigio" Grey Metallic body color and the dash is customized with a full array of Mopar gauges.

The body-color center console holds a manual shifter from the Dodge Challenger SRT Hellcat, as well as the ignition button and toggle switches for the headlamps, wipers, fog lights and hazard lights. The stock front seats have been replaced with Dodge Viper seats re-wrapped in Alcantara leather accented with red stitching and are fitted with four-point Sabelt black racing harnesses. The Dodge Challenger SRT Demon seat delete option opens up the rear and also sheds weight while making space for a custom 2-inch roll cage designed to follow the profile and harmonize with the shape of the day light opening (DLO). A Challenger SRT Demon net allows for storage of racing equipment such as helmets and gloves. A black Challenger SRT Hellcat carpet covers the rear of the interior, while the front features custom floor mats modified from the current Charger SRT and Mopar pedal kits for the Challenger.

About Mopar
Mopar (a simple contraction of the words MOtor and PARts) is the service, parts and customer-care brand for FCA vehicles around the globe. Born in 1937 as the name of a line of antifreeze products, the Mopar brand has evolved over more than 80 years to represent both complete care and authentic performance for owners and enthusiasts worldwide.

Mopar made its mark in the 1960s during the muscle-car era, with Mopar Performance Parts to enhance speed and handling for both road and racing use, and expanded to include technical service and customer support. Today, the Mopar brand's global reach distributes more than 500,000 parts and accessories in over 150 markets around the world. With more than 50 parts distribution centers and 25 customer contact centers globally, Mopar integrates service, parts and customer-care operations in order to enhance customer and dealer support worldwide.

Mopar is the source for genuine parts and accessories for all FCA US LLC vehicle brands. Mopar parts are engineered together with the same teams that create factory-authorized specifications for FCA vehicles, offering a direct connection that no other aftermarket parts company can provide. Complete information on the Mopar brand is available at www.mopar.com.