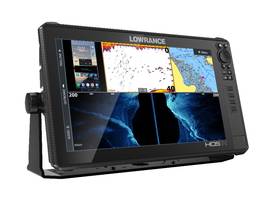 Lowrance’s HDS LIVE™ Fishfinder/Chartplotters is designed for providing real-time sonar, charting and connectivity options such as Active Imaging™, LiveSight™, Genesis Live and LiveCast™ smartphone integration. The plotter’s active imaging 3-in-1 sonar improves FishReveal™ with higher-level clarity and target separation and is operated at 800 kHz that provides cleaner 3D view and custom depth shading feature. The LIVE™ enables user to display fishing information and entertainment via smartphone on the 12 and 16 in. sunlight viewable displays.

See structure and cover with a new level of refined detail and at a range unmatched by any other structure imaging technology with Active Imaging.Offering industry-leading clarity without sacrificing range, it delivers unmatched image quality of structure, fish and bottom composition. Active Imaging 3-in-1 sonar combines Lowrance CHIRP, with SideScan and DownScan Imaging™ allowing anglers to quickly search fish-holding structure, and enhances FishReveal™ with higher-level clarity and target separation. Active Imaging 2-in-1 sonar includes Side and DownScan Imaging™ and is perfect for use with a separate traditional sonar transducer. Simple to use without the need to change frequencies while fishing in most conditions, Active Imaging 800 kHz provides crystal-clear detail with uncompromised range. For anglers needing to see further than 120 feet, Active Imaging can also operate at 455 kHz. Active Imaging enhancements — including greater resolution, a cleaner 3D view and a new Custom Depth Shading feature — are coming to existing StructureScan® 3D modules in the Fall of 2018 through a free software update.

Sonar interpretation made simple, LiveSight™ sonar delivers the most detailed views of fish, down to every turn and flip of the tail, as they swim in and around cover. You’ll be fishing in real-time as you watch fish react to your lure, see how they are relating to structure and gain insight on what will work, what won’t and what to do next.

When using LiveSight forward in conjunction with the Lowrance Point-1 GPS antenna, an innovative on-chart indicator shows the direction the transducer is pointed, allowing anglers to line up on a waypoint or pinpoint the structure they are trying to fish.

Delivering real-time, custom-mapping capabilities, HDS LIVE harnesses the power of Genesis Live charting, which uses digital depth to create depth-contour overlays on charts. Incredibly easy to use, users can control contour transparency, density of contours drawn on the screen up to unprecedented ½-foot intervals, depth and safety shading color palettes, and more. Charts can quickly and easily be saved to an SD card for continuous use.

HDS LIVE allows anglers to display important fishing information and entertainment from their smartphones on their 12- and 16-inch sunlight viewable displays. Users can view their smartphone in full-screen or split-screen windows via HDMI connection allowing them to stream video, view Google Maps and fishing data on the HDS LIVE touchscreen — all while their phone is safely stowed.

“After 60 years, Lowrance continues to be the No.1 fishfinder for America’s biggest freshwater tournaments — more than all other brands combined,” said Leif Ottosson, CEO and president, Navico. “Today, HDS LIVE takes fishfinding to a whole new level — delivering new sonar, charting and connectivity features that will make the most of your time on the water. Once you experience it, you won’t want to fish without HDS LIVE.”

HDS LIVE features a stunning new low-profile design with edge-to-edge glass; a SolarMAX™ HD screen; bracket, flush and rear mounting options; user-programmable keys; and an optional fully-programmable Bluetooth® remote. Available in 7-, 9-, 12- and 16-inch display sizes, HDS LIVE ranges in price from $949 to $4,499. Active Imaging can be purchased as a bundle with HDS LIVE or as a separate accessory for $299; the LiveSight transducer is priced at $999.