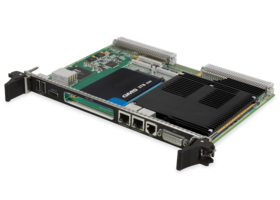 "We have supplied three different product families to the Navy, hundreds of boards, and three generations of Intel and Motorola processors," said Ben Sharfi, CEO and chief architect at GMS. "In every single case, it was a smooth upgrade for the Navy, which is why they keep coming back to us. No other VME vendor in the industry can claim this tech-refresh success rate."

GMS has been building VME boards and systems since the VME standard's inception, over 30 years ago. The company's VME boards and systems use a modular "engine" containing the processor that can be evolved as technology changes over time. The engine plugs onto a VME base "carrier" board with system interfaces that change very slowly, if at all. The elegance of this design approach is that the processor and memory evolve with Moore's Law, while connections to the VME system remain constant and predictable. Early versions of the VME SBC family started with Motorola PowerPC and Intel Core Duo CPUs, while current versions, including the GMS VME120 "Royal Albatross," are based on Intel's four-core, 7th-generation Core i7 Kaby Lake CPU.

Unique to the VME120 is the modular design that enables it to remain backward compatible with legacy versions while also providing the newest and fastest graphics and processing. In the single-slot version, a PMC or XMC I/O board, or a SATA SSD can be mounted on the board to provide both backplane and front-panel I/O. The dual-slot versions add a PCI Express Workstation I/O (WSIO) mezzanine carrier card that supports additional I/O mezzanines: MXM (1x), PMC or XMC (3x). Collectively, the VME120-WSIO reduces an entire chassis' worth of VME boards into a mere two slots. Thanks to the VME120's backward compatibility, the card can support VME32, VME64, 3- and 6-row VME connectors, and a center P0 connector, depending on the variant.

The VME120 supports the user's choice of an XMC/PMC with front panel I/O or a SATA SSD mounted on the SBC itself. The dual-slot VME120-WSIO provides up to three additional XMC/PMC sites, or two sites with an add-on MXM. When equipped with an MXM, the SBC supports triple video outputs, with options for dual VGA and "sync on green" for legacy military consoles.

General Micro Systems (GMS) is the rugged server company. The company is known as the industry expert in highest-density, modular, compute-intensive, and rugged small form-factor embedded computing systems, servers, and switches. These powerful systems are ideal for demanding C4ISR defense, aerospace, medical, industrial, and energy exploration applications. GMS is an IEC, ISO, AS9100, NIST-800-171, and MIL-SPEC supplier with infrastructure and operations for long-life, spec-controlled, and configuration-managed programs.

Designed from the ground up to provide the highest performance and functionality in the harshest environments on the planet, the company's highly customizable products include GMS Rugged DNA™ with patented RuggedCool™ cooling technology. GMS is also the leader in deployable high-end Intel® processors and a proud Intel® partner since 1986. For more information, visit www.gms4sbc.com.