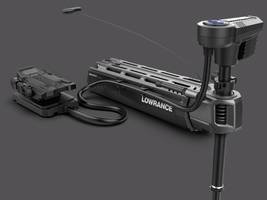 Tulsa, Okla. – Lowrance®, a world-leader in fishing electronics since 1957, announced the next step in Lowrance’s delivery of the ultimate fishing system to the serious angler – the new Lowrance Ghost freshwater trolling motor.

Reliable, rugged and built to last, the new ultra-quiet Lowrance Ghost freshwater trolling motor helps anglers fish longer, run faster and get in closer without making a sound. Ghost has a newly designed brushless motor with the most thrust and the longest run time of any trolling motor on the market, plus other benefits including integrated Lowrance sonar options, waypoint anchoring and a three-year warranty. The combination of reliability, power, efficiency and quiet performance give the Ghost trolling motor a winning combination that ticks all the boxes for what anglers want in a premium trolling motor.

“Because Ghost is Lowrance's first trolling motor, we started completely from scratch, which gave us a unique opportunity to ask anglers what was most important to them in a trolling motor,” said Lucas Steward, Navico’s Trolling Motor Product Group Owner. “To get the quality we needed, we had to design and build it in-house. That resulted in the production of a trolling motor that delivers exactly what our consumers want: the most power, greatest efficiency and quietest performance – the ultimate trolling motor versatile enough to fit any bass boat.”

Users can steer, adjust speed, set up route navigation or anchor at a current location with touchscreen control from a Lowrance display using the SmartSteer™ interface. Ghost pairs easily with HDS LIVE, HDS Carbon and Elite-Ti2 displays via a simple NMEA 2000® connection.

Instant and smooth fly-by-wire steering control gives Ghost the feel of a cable-steer motor, but without the mechanical cables that can wear out over time. Regardless of the brand of trolling motor used before, anglers will quickly get comfortable with the innovative Ghost foot pedal, which is completely user-configurable. The pedal can be customized to suit any preferences with programmable shortcut buttons and a Flip Switch that can be moved to allow the trolling motor to be engaged from either side of the pedal. The mode buttons have LED lights and an indicator beep to provide feedback when a mode is engaged. The foot control also features a battery-level indicator.

The 360-degree breakaway mount is designed to take the brunt of any impacts and will automatically realign itself once clear of impacted structure. A composite shaft with lifetime warranty assists in with standing impacts, and an integrated stabilizer bar reduces bouncing when on plane in rough water. The foot pedal cable is secured to the mount with robust clips, preventing it from moving around on the deck, damaging rods and reels and blocking the view of Lowrance fishfinders installed nearby. Ghost is currently available in a 47-inch shaft model with future shaft-length options coming soon.

The motor weighs six pounds less than brushed-motor equivalents, making it easier to install, deploy and stow. Ghost is designed to work in either 24- or 36-volt systems with up to 97- and 120-pounds of thrust, respectively, and allows for future battery and charger upgrades.

For more information about the new Ghost trolling motor or the entire Lowrance line of marine electronics, please visit www.lowrance.com.