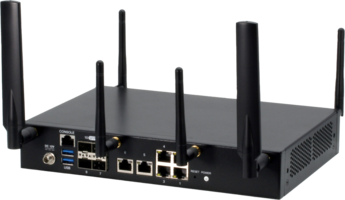 The FWS-2365 is built to deliver faster network speeds and higher throughput with up to four SFP+ Fiber 10 Gbps ports, and up to six copper Gigabit LAN ports, two of which can be upgraded to SFP. The FWS-2365 supports LAN Bypass functionality to provide uninterrupted connection and service.

The FWS-2365 is also built to maximize wireless performance, supporting up to three wireless expansion cards and six antennas. The FWS-2365 can support a combination of cards including Wi-Fi, 4G and 5G cellular communication. This allows for greater support for IoT connected devices and leverages the benefits of 5G to enable more flexible network structures.

The FWS-2365 is purpose built for white box uCPE and SD-WAN network applications. It is easy to setup and configure for a range of NFV functions such as firewall and router, as well as VPN. The FWS-2365 also supports Zero Touch Provision (ZTP) to make deployment, setup and network authorization even easier. The system also supports remote console connection for more flexible system management and monitoring.

About AAEON
Established in 1992, AAEON is one of the leading designers and manufacturers of industrial IoT and AI Edge solutions. With continual innovation as a core value, AAEON provides reliable, high-quality computing platforms including industrial motherboards and systems, rugged tablets, embedded AI Edge systems, uCPE network appliances, and LoRaWAN/WWAN solutions. AAEON also provides industry-leading experience and knowledge to provide OEM/ODM services worldwide. AAEON also works closely with cities and governments to develop and deploy Smart City ecosystems, offering individual platforms and end-to-end solutions. AAEON works closely with premier chip designers to deliver stable, reliable platforms, and is recognized as an Associate member of the Intel® Internet of Things Solutions Alliance and Solutions Plus Partner in the Intel® Network Builders Winner’s Circle for 2020. For an introduction to AAEON’s expansive line of products and services, visit www.aaeon.com.