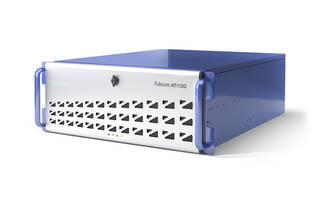 The compact 4K server system enables advanced slow motion and instant replay capabilities as well as direct recording for editing ‘on site’. Search is available on all recorded channels simultaneously with recording and playing back of two channels with transition effects. The automatic creation of clips during instant replays is a Slomo.tv proprietary feature, which allows the operator to quickly create highlights/summary packages while working in instant replay mode

“While 4K cameras are becoming more affordable, the cost of a 4K replay channel is still expensive,” commented Igor Vitiorets, CTO at Slomo.tv. “Addressing this issue, we have developed our most affordable, but still powerful broadcast grade 4K slomo server in the Fulcrum AT/12G. Since many manufacturers use 12G SDI interfaces for 4K (UHD) production workflows this server is equipped with universal 12G/3G/HD/SD video interfaces, enabling just one (BNC) connector for all standards. This perfectly fits modern cameras and switchers and significantly reduces the number of connecting cables.”

Significant features of Fulcrum AT/12G include:

• Simultaneous access to all recorded channels and two play channels with transition. For any resolution - (4K/3G/HD/SD) the server provides 4REC+4SEARCH+2PLAY channels.

• SSD storage capacity of 133 hours of HD video could be doubled or quadrupled.

• Export and import of video files without additional equipment into native MXF files within editing system with XDCAM422 50 Mbit codec for 3G/HD and QuickTime ProRes 422 for 4K video.

A built-in Multiviewer features five basic configurations of different numbers of video feeds - displaying video inputs, search channels, and system video outputs. Developed specifically for production environments where space-saving is at a premium, a MultiSkin function allows the operator to use one monitor to display different interfaces: the main GUI interface, Multiviewer or Game Analyzer (telestrator).

Together with several SSD technology developers, Slomo.tv has developed the capability of recording and storing high-quality video with SSD technology. The use of SSD storage empowers Slomo.tv servers with a number of advantages – search on all channels, recording uncompressed full-resolution video signals, large built-in storage capacity, lightweight servers, and the ability to operate in harsh conditions including high vibration levels.