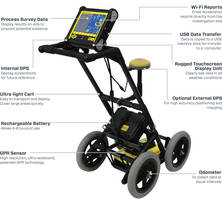 The FINDAR® Ground Penetrating Radar is designed for aiding in search of buried forensic evidences such as clandestine graves, drugs or money buried in metal or plastic containers and buried weapons. The radar generates on-site 3D images in seconds with pinpointing position and depth. The unit’s built-in GPS automatically geo-references grids and screen shots. The unit creates depth slices of large areas by utilizing an accurate GPS and EKKO Project™ software.

TORONTO, Aug. 8, 2018 /PRNewswire/ - Sensors & Software is pleased to announce an exciting update to FINDAR®, the ground penetrating radar (GPR) created specifically for law enforcement to aid in the search for buried forensic evidence. FINDAR® can locate clandestine graves, drugs or money buried in metal or plastic containers and buried weapons.

Sensors & Software has incorporated customer feedback into this upgraded FINDAR system. The key features are:

Improved Ease of use:

The new FINDAR brings a new level of functionality and efficiency to forensic investigations.

Founded in 1988, Sensors & Software is the worldwide leader of Ground Penetrating Radar innovations. The company offers a wide range of hardware and software products and services designed to understand what lies beneath the surface and empower informed decision–making.