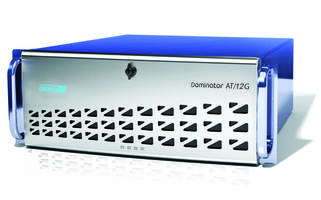 Designated Dominator AT/12G, the new server provides advanced slow motion and instant replay capabilities as well as direct recording for editing ‘on site’. In the 4K mode it supports the 662 configuration (6REC+6SEARCH+2PLAY), however in 3G/HD replay mode it supports 10-channels recording, search on all channels and four channels replay (10REC+10SEARCH+4PLAY). Mode switching is achieved with one button push and does not require any re-configuration of the system.

“Since many manufacturers use 12G SDI interfaces for 4K (UHD) operation, the new server is equipped with 12 universal 12G / 3G / HD / SD video interfaces,” explains Michael Gilman. “This allocates one (BNC) connector for all standards, which perfectly fits modern cameras and mixers and significantly reduces the number of connecting cables.”

Of value in compact OB environments, an optional MultiSkin function allows the user to display several different interfaces on one monitor: these include the main GUI interface, Multiviewer and Game Analyzer (telestrator).