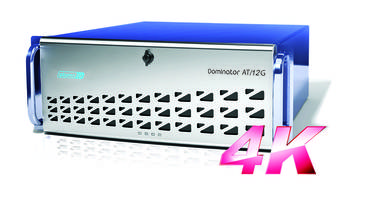 With this extended functionality Dominator AT/12G is suited to use in eSports, where the main requirement is the support of a large number of incoming 3G signals in a single device.

The latest version of Dominator offers a versatile server platform for studios and OB Vans, since the choice of equipment for OB Vans focuses on the ability to use it both for multi-channel recording and slow-motion replays. The server is designed to work with a large number of channels, to provide slow motion replays at major sports competitions and recording for non-linear editing of large-scale TV shows and events. It provides simultaneous recording of up to 16 channels of HD video with ProRes 422 or AVID DNxHD codecs on hard drives or NAS. Dominator AT/12G is equipped with 8 DMRTM Racks for Toolless/Trayless installation of standard 3.5" SATA HDDs.

“The ideology of “server grows with you" is now applicable to Dominator AT/12Gl. In addition to hardware and software upgrades, the server sale scheme has also undergone changes, allowing customers to purchase only the necessary capabilities for current tasks and not to overpay for unused ones,” explained Michael Gilman, CEO of Slomo.tv. “If there is no need to work with 4K signals, the user can purchase a server in basic configuration to work with 3G/HD for 70K euro, and then add 4K support later for only 10K euro.”

The server is equipped with four graphical outputs, which provide each operator workplace with two monitors for displaying the main interface and Multiviewer. The server has built-in high-speed 10GbE interfaces for recording on NAS and accelerating the exchange of clips and playlists when working over the network.

Dominator AT/12G, together with other slow-motion replay servers will be showcased on the slomo.tv booth (8.B40) at IBC 2019. To book a meeting, please contact info@slomo.tv

Over the last decade, the company has successfully introduced complete lines of high quality multi-channel professional video recording and instant replay products. Slomo.tv has brought to market a number of effective solutions for tapeless video production technology. Slomo.tv systems, such as Dominator and Simple R, are widely used on major TV channels, and the company’s sports video judging system videoReferee®, has become an integral part of many sport arenas worldwide.