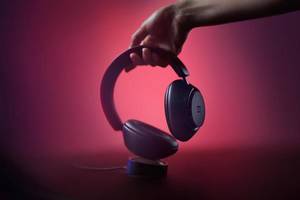 The Dolby Dimension Wireless Headphones is suitable for home entertainment applications. The product is offered with Dolby LifeMix and one-touch switching features. The LifeMix feature enables the user to control how much they hear of their surroundings whereas the one-touch switching allows user to seamlessly switch between screens with ease. The headphones comes with three source buttons on the right earcup that helps in changing source devices like Bluetooth-enables TV, computer, tablet or phone.

Streaming services have fundamentally changed the way consumers watch and listen to their entertainment. There is more premium content available than ever before and consumers are accessing it at all times, across multiple devices.

With Dolby Dimension, consumers can be fully immersed with cinematic sound, while staying connected to their important everyday life moments, all while binge watching their favorite hit series on Netflix, iTunes, or Amazon Prime Video.

Dolby LifeMix is a proprietary new technology central to the Dolby Dimension experience. It allows consumers to control how much they hear of their surroundings — from a perfect blend of their entertainment and life around them (Transparency) to shutting out the world (Active Noise Cancellation).

“Dolby’s true north is uniting the art and science of entertainment, elevating the creators’ ability to tell their stories and enabling consumers to be immersed in spectacular experiences,” said Kevin Yeaman, President and CEO, Dolby Laboratories. “Today we continue that journey with the introduction of Dolby Dimension.”

Dolby Dimension eliminates the days of “volume rodeos” consumers often have in turning the volume up and down so as not to disturb others, and the days of “read watching” with subtitles because the volume is so low consumers can’t hear dialogue. There is no need to watch with one ear cup off or go to a separate room because they want to watch something different from their partner or roommate. Instead, consumers can fully immerse themselves in entertainment whenever they want.

Premium materials, fit and finish, and intuitive touch controls all come together to ensure long-lasting comfort for binge sessions, allowing people to relax and escape for long periods of time with total peace of mind. Custom-designed 40mm acoustic drivers, an advanced microphone array, and proprietary signal processing help consumers immerse themselves in their shows like never before — all while allowing them to stay present where it matters most.

Additionally, the Dolby Dimension app, available for free on iOS and Android platforms, allows people to adjust key features — such as Dolby LifeMix, Virtualization, and Head Tracking — and manage paired devices. The included Power Base gives their Dolby Dimension a home within their home, keeping it charged while not in use and easily accessible for the next binge session. Intuitive Touch Controls on Dolby Dimension let people toggle LifeMix, hit play or pause, adjust volume, go forward or back, activate Siri or Google Assistant, and take calls — all without having to pick up a remote or their source device.

Dolby Dimension will be available for $599 (US) in the United States beginning today at dolby.com. Experience it in select b8ta stores starting December 1st.

Visit Dolby.com to learn what makes Dolby Dimension unlike anything ever heard before.

About Dolby Laboratories
Dolby Laboratories (NYSE: DLB) is based in San Francisco with offices in over 20 countries around the globe. Dolby transforms the science of sight and sound into spectacular experiences. Through innovative research and engineering, we create breakthrough experiences for billions of people worldwide through a collaborative ecosystem spanning artists, businesses, and consumers. The experiences people have — with Dolby Dimension™, Dolby Vision®, Dolby Atmos®, Dolby Cinema™, Dolby Voice®, and Dolby Audio™ — revolutionize entertainment and communications at the cinema, on the go, in the home, and at work.

Dolby ®, Dolby Dimension™, Dolby LifeMix™, and the double-D symbol are among the registered and unregistered trademarks of Dolby Laboratories, Inc. in the Unites States and/or other countries. Other trademarks remain the property of their respective owners. DLB-G