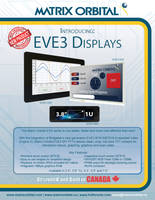 With the addition of the BT815 and BT816 ICs, Bridgetek has improved and extended the capabilities from the previous generations of FT8xx Embedded Video Engine (EVE) ICs. These new ICs provide engineers the ability to design and create dynamic Human Machine Interfaces (HMIs) with display, audio and touch support.

New features of the BT81x include memory management and system resource improvements, as well as, support for the Adaptive Scalable Texture Compression (ASTC) algorithm to provide significantly enhanced image quality without requiring additional bandwidth. With the dedicated QSPI host port, these ICs support external flash memory to extend the on-chip capacity for storing additional image and audio objects, including bitmaps and fonts.