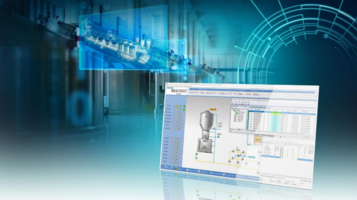 Siemens is presenting a new version of the Braumat brewery process control system at the BrauBeviale in Nuremberg: The latest version 8.0 is based on the Simatic S7-1500 controller and has been optimized in the areas of reporting, weighing systems and security. Already installed Simatic S7-400 controllers can still be used, including in mixed operation. Existing Braumat installations can be expanded or modernized with Simatic S7-1500 controller. Production downtimes caused by new installations are thus avoided.

In order to enhance the reporting options, a batch report with a basic choice of process parameters has been integrated. Users can now create reports with the help of MS Excel. Braumat V8.0 is also now connected to the established PM-Quality option. This means that MES (Manufacturing Execution System) and MIS (Management Information System) functions are now available for calculating KPIs (Key Performance Indicators) such as plant availability. In the new version, storage location management is integrated together with dosage management in the recipe system, enabling the efficient and flexible automation of mixing processes. Recipes are automatically adjusted according to storage location availability and the quantity specifications of the batches to be produced. High-precision, self-optimizing weighing operations are fully automated with the integrated Siwarex weighing system. The Braumat V8.0 process control system continuously checks recipes and quantities for the individual production processes, thus reducing overdoses of malt, hops and diatomaceous earth. A combination of password protected Simatic S7-1500 controllers, encrypted communication on the terminal bus as well as extended user management and company ID registration via an RFID card reader increases security during the production sequences.

New Braumat V8.0 is available in both a standard and lean edition: With Braumat Lean, micro breweries and craft brewers can benefit from process automation from just a quantity of four units and one Simatic Open Controller. This can be expanded up to 40 units as required. Braumat Lean can also be operated as a compact, single user station or for remote areas of large breweries, such as laboratories. With the Standard edition, it is possible to create complex plant structures with redundant client-server features and server visualization. The Lean Edition of Braumat V8.0 can be expanded to the Standard Edition. After just a few days of training, users are able to configure new Braumat plants. For other food and beverage sectors such as dairies, cheese factories or soft drinks, the Sistar version 8.0 process control system is available.

As a long-term partner in the international brewing and beverages industries, Siemens is demonstrating at this year's BrauBeviale being held in Nuremberg from November 12 through 14 how its innovative brewery automation processes enable the first step into digitalization. Visitors to booth 419 in hall 7 can experience the path to digitalization themselves: Exhibits stretch from the lean version of the Braumat process control system for the automation of micro breweries, to a standard Braumat system with a Manufacturing Operation Management (MOM) solution and energy management, to cutting-edge technologies such as cloud and edge computing.