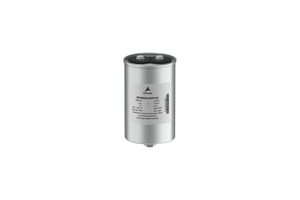 TDK Corporation (TSE:6762) presents the new B2568* series of EPCOS MKP DC link power capacitors, which offer outstanding robustness under harsh environmental conditions. The new capacitors are designed for voltages of between 900 and 3000 V DC and cover a capacitance range from 50 to 4000 µF. Depending on type, the capacitors are dimensioned for currents of up to 100 A. The ESL values range from 35 to 80 nH. Capacitors with ESL values of less than 20 nH are available upon request.

Thanks to the polyurethane filling, the windings have a high mechanical stability within the hermetically sealed can. The capacitors comply with climate class C and pass a THB test (temperature, humidity, bias) at 85 °C, 85 percent relative humidity with a rated voltage applied for 1000 hours. Condensation up to a certain level on the capacitors during operation is also permissible. In addition, the new power capacitors meet all requirements concerning fire protection in rail vehicles according to EN 45545.

Thanks to their great robustness and the high rated voltages, these capacitors are particularly suitable for IGBT-based converters in traction applications, as well as medium-voltage drives.

Further information on the products can be found under www.tdk-electronics.tdk.com/en/pec

About TDK Corporation
TDK Corporation is a leading electronics company based in Tokyo, Japan. It was established in 1935 to commercialize ferrite, a key material in electronic and magnetic products. TDK's comprehensive portfolio features passive components such as ceramic, aluminum electrolytic and film capacitors, as well as magnetics, high-frequency, and piezo and protection devices. The product spectrum also includes sensors and sensor systems such as temperature and pressure, magnetic, and MEMS sensors. In addition, TDK provides power supplies and energy devices, magnetic heads and more. These products are marketed under the product brands TDK, EPCOS, InvenSense, Micronas, Tronics and TDK-Lambda. TDK focuses on demanding markets in the areas of information and communication technology and automotive, industrial and consumer electronics. The company has a network of design and manufacturing locations and sales offices in Asia, Europe, and in North and South America. In fiscal 2019, TDK posted total sales of USD 12.5 billion and employed about 105,000 people worldwide.