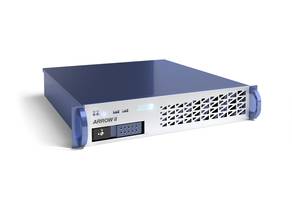 Arrow II is cost-effective production and relay server offered in a compact 2U rack space footprint and a 9kg form factor. Eight bi-directional 3G/HD/SD SDI video ports allow for remote upgradation of the basic 442 to 662. The server has a storage of up to 533 hours of HD video. 662 configuration provides six recording channels with simultaneous search on all channels and two playback channels with transition effects. Supported codecs in the DMR™ option include ProRes 422, DNxHD, DVCProHD, and XDCAM 422. Other features include redundant power supply, intuitive user interface, and built-in multiviewer with remote control facilities.

TORRANCE, CA (March 2, 2018) –  At NAB (booth C9815), Slomo.tv, a leading international producer of cost-effective, high performance video record and replay systems, will introduce the latest addition to its Arrow series of broadcast production and replay servers. With a compact 2U rack space footprint, the Arrow II server is feature rich despite offering a highly cost-effective entry point to this technically demanding market. At NAB Slomo.tv is offering a special price for the basic 442 model, providing four record, four search and two playback with transition channels for US $20,000.

“The Arrow line is our entry-level solution, setting a new standard in cost-effective production and replay servers,” commented Michael Gilman, CEO of Slomo.tv. “The servers are based on our successful server platform, with eight bi-directional 3G/HD/SD SDI video ports, which makes it possible to remotely upgrade the basic 442 model to a 662 configuration.  With built-in storage of up to 533 hours of HD video as a standard feature Arrow II offers a uniquely cost-effective option in the professional broadcast market.”

Arrow II is the first budget server to provide a DMR™ option for direct recording in NLE file formats. This option includes an external 1U device that records video on standard 3.5” SATA hard drives installed in four racks, enabling the recorded video to be used immediately for NLE.  The server also has 10 GbE interface, which allows recording of NLE files on any Network Attached Storage (NAS).

The DMR™ option supports ProRes 422, DNxHD, DVCProHD, XDCAM 422 codecs. Also, the new server includes a free of charge Transfer (networking) option for exchanging clips and playlists, as well as telestrator (Game Analyzer), which allows operators to draw on the video being played.

It is important to note that Arrow II with its videoReferee® option can also be used as ideal eight-channel video judging system in different sport leagues.