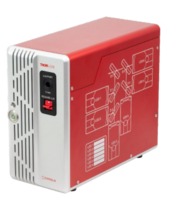 Newton, NJ – May 11, 2020 – Thorlabs has announced the release of its new 6- Color Light Engine for fluorescence excitation applications. The configurable Chrolis™ design combines the light from 6 customer-chosen high-power LEDs into a single ∅3 mm liquid light guide. Users can select from 11 different wavelength options with outputs ranging from 365 nm to 780 nm, covering all known fluorophores. As experimental needs change, the Chrolis light engine is easily reconfigured, as the LED modules and dichroic mirrors are also available for individual purchase.

Each LED’s intensity can be individually controlled via an easy-to-use graphical user interface, which also offers extensive pulse capabilities. Light pulses are generated internally. For each LED, the pulse parameters can be set separately. The pulses are optimized for fast rise/fall times and offer best-in-class waveforms. Via a BNC breakout box, it is also possible to trigger the LEDs from external signals. Alternatively, the pulses generated internally can be used to trigger external devices, such as cameras.

"We are excited to introduce this new high-end LED source, which is designed, developed, and produced by Thorlabs’ Munich-based team," noted Bruno Gross, General Manager of Thorlabs GmbH. "Over the next year, we are planning to expand this product line with additional optical, electronic, and software features."

Thorlabs, a vertically integrated photonics products manufacturer, was founded in 1989 to serve the laser and electro-optics research market. As that market has spawned a multitude of technical innovations, Thorlabs has extended its core competencies to play an ever-increasing role serving the Photonics Industry at the research end, as well as the industrial, life science, medical, and defense segments. The organization’s highly integrated and diverse manufacturing assets include semiconductor fabrication of Fabry-Perot, DFB, and VCSEL lasers; fiber towers for drawing both silica and fluoride glass optical fibers; MBE/MOCVD epitaxial wafer growth reactors; extensive glass and metal fabrication facilities; advanced thin film deposition capabilities; and optomechanical and optoelectronic shops.