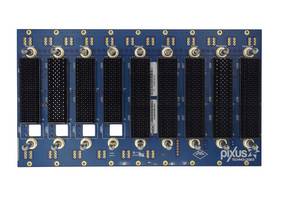 New 3U OpenVPX Backplanes in VITA 65 and VITA 66.4 Optical Formats

Pixus has developed OpenVPX backplanes utilizing the BKP3-CEN07-15.2.3 VITA 65 profile. The 7-slot backplane is standardly designed to PCIe Gen3 speeds with options for higher levels. Pixus has also modified the base backplane design to include versions with cutouts for VITA 66.4 contacts for optical interfaces over OpenVPX. The company also offers single slot power and ground OpenVPX backplanes in VITA 65, VITA 67.3, and VITA 66.4 formats.

The OpenVPX backplanes can be utilized in open frame or various 19” rack mountable chassis platform designs. Conformal coating is optional as are populating the Rear Transition Module (RTM) connectors.