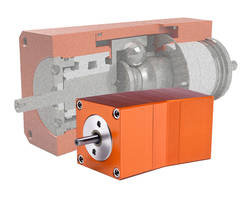 Using an engineered traction fluid with a coefficient of friction of just 0.1 to 0.12 that cools and lubricates the traction drive these high efficiency speed reducers generate up to 72% less heat even after days of continuous operation. There is no slippage or lost motion between the input and output shafts even though there is no metal to metal contact as the traction fluid is continuously changing from liquid-to-solid-to-liquid as the driving and driven elements interface in the drive. Creating 38% lower dB at 3000 rpm than conventional gearboxes these people friendly speed reducers are ideal for use in medical equipment such as mobile hospital equipment and dialysis machines as well as pumps, blowers, fans, turbo and super chargers, conveyers, HVAC systems, and other power transmission and motion applications.

Having low vibration, and no torque losses from 10 to 3000 rpm, these speed reducers featuring traction drive technology lets a motor operate at peak efficiency while having a damping effect on a motor's torque ripple. These revolutionary speed reducers are available with an optional overriding clutch. Incorporating standard NEMA mounting dimensions, these speed reducers can be easily integrated into new and existing applications.