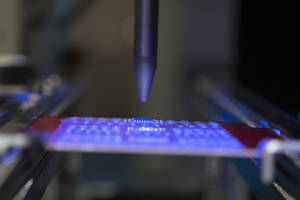 Electrolube's new 2K850 conformal coating features faster processing times in less than 12 hours and an advanced UV cure mechanism, while offering high levels of protection. The product also features a no reliance on a moisture cure.

Electrolube will be conducting live, stand-based demonstrations of its revolutionary new 2K850 conformal coating material using a line-up of three machines covering: dispensing and cure, followed by an end-of-line test of the coating using groundbreaking new technology developed in partnership with Electrolube.

Electrolube plans a major attraction in Hall B4 Stand 315 at Electronica this year with live demonstrations of one of the most important new conformal coatings to come to market in recent years. 2K850 will be dispensed, cured and tested in as close as possible to a real processing environment that can be reproduced on an exhibition stand. Visitors will be able to discuss all stages of the coating, curing and testing processes with Electrolube’s leading industry experts who will be on hand to answer visitors’ queries and suggest possible solutions to any material choices and processing problems that they may have.

2K850 is the latest addition to the company's revolutionary new '2K' two-part conformal coating portfolio and thanks to its advanced UV cure mechanism, 2K850 delivers significantly faster processing times while still offering superb levels of protection. This product does not rely on a moisture cure unlike many conventional single part coatings, and in fact, the secondary cure can be guaranteed in less than 12 hours.

The new 2K range has been extensively tested against UV and silicone coatings in thermal shock, powered salt-spray, condensation and mixed flowing gas test regimes that are commonly used during automotive qualification campaigns. In each of these tests, the new 2K materials outperformed the UV and silicone materials in every respect, withstanding thermal shock and demonstrating outstanding salt-mist and condensation resistance.

During the show in Hall B4, visitors will be invited to witness sample PCBs being coated with the 2K850 material via a PVA Delta 8 robotic selective conformal coating machine. The PVA Delta 8 features specially developed, low volume progressive cavity pumps that achieve accurate control over the flow rates of the Part A and Part B materials to maintain the correct volumetric mix ratio. From here, the coated boards are transferred to a UVA curing oven featuring the lastest LED based technology to illustrate the rapid, easy cure of 2K850.

The final testing stage is conducted on a 3D-Ami-CCI metrology machine, the development of which drew benefit from Electrolube’s extensive market knowledge and practical assistance, including the supply of materials, partnering in CCi trials, and the provision of technical guidance and independent sectioning reports for calibration purposes. This groundbreaking, patent-pending system uses 3D laser triangulation and confocal techniques to measure the depth and distribution of conformal coatings in the X, Y and Z co-ordinates to micron resolution across all surfaces of a PCB assembly, including the leads and solder joints on fine pitched devices.

In addition to its extremely accurate coating depth and coverage measurement capability, which will be the focus of its Electronica debut, the 3D-Ami-CCI is also equipped to detect PCBA faults such as foreign object debris (FOD), tin whiskers, PCB de-lamination and contamination by greases, adhesives, pastes, flux and so on, both visible and obscured.

It is rare for an exhibitor to go to such lengths to demonstrate to live audiences the properties of a new product range using such advanced equipment. Electrolube and its process equipment partners have invested considerable time and effort to mount these demonstrations and the company is confident that they will prove a major draw to its stand this year.

Ron Jakeman, Managing Director of Electrolube, comments, “We are excited to be launching some of the most advanced conformal coating solutions on the market at Electronica this year. Our breakthrough product, 2K850, offers major advantages over the first generation of single part UV cure coatings, particularly relating to issues with coatings cracking during thermal shock, or requiring an extended moisture cure process to reach final properties. The beauty of this robust alternative solution is that customers can use their existing production equipment with the minimal addition of a 2K fluid system.

"We are looking forward to engaging with visitors on the stand and, in particular, at getting their views and feedback about the live demonstrations which will take the new 2K850 material through dispensing, curing and testing processes all in one location. 2K850 is a real game-changer and as we prepare to demonstrate its groundbreaking properties, we anticipate a lot of interest in this coating at the show."

The extensive range of electro-chemicals at Electrolube enables the company to offer a ‘complete solution’ to leading manufacturers of electronic, industrial and domestic devices, at all levels of the production process. Through collaboration and research, the company is continually developing new and environmentally friendly products for customers around the world and their commitment to developing ‘greener’ products has been endorsed by the ISO 14001 standard for the highly efficient Environmental Management System in place at the company.

Winners of the Queen’s award for Enterprise 2016, Electrolube is represented in over 55 countries with an established network of subsidiaries and distributors. By offering genuine security of scale and a reliable supply chain, the company is able to deliver a truly tailored service.