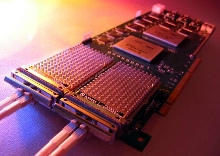 The MTP-10G is a standard 64-bit, 66-MHz, full-size PCI card that routinely passes Gigabit Ethernet traffic between its two 10-gigabit ports with 500 ns latency while performing wire-speed, stateful, packet inspection. When determining whether to capture or block packets, the card can apply up to 650 wire-speed stateful policies per packet. When the MTP-10G captures packets, it presents them to the operating system as a standard NIC in promiscuous mode. Users can install up to six cards in a single host, resulting in a total IDPS capacity of 60 Gbps (at least 10 times greater than any existing IDS or IPS).

Metanetworks will present the impressive capabilities of the MTP-10G PCI cards at the upcoming Joint Techs Workshop from February 13th to 17th in Salt Lake City. Livio Ricciulli says, "By embracing the open-source model, we hope that our MTP devices will be a major catalyst for change in IDPS technology much as open-source operating systems were to the early PC market."

About the Joint Techs Workshop