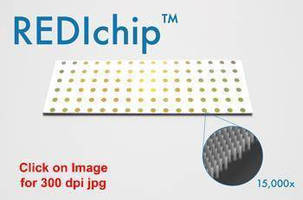 Intended for pharmaceutical researchers, REDIchip™ Resonance-Enhanced Desorption Ionization Chip is designed for mass spectrometric analysis on MALDI platforms without need for matrix. Ability to reproducibly detect and quantitate small molecules is made possible due to structured nanopost array present in silicon chip.

This nanopost array technology, called REDIchip™ (Resonance-Enhanced Desorption Ionization), was invented in the laboratory of Akos Vertes, PhD., Department of Chemistry, The George Washington University. The chip is designed to be used for mass spectrometric analysis on MALDI platforms without the need for matrix.

“REDIchips provide a solution to pharmaceutical researchers interested in detecting small molecules without the common interference of chemical matrix.  The ability to reproducibly detect and quantitate small molecules is made possible due to the structured nanopost array (NAPA) Spresent in the silicon chip,” stated Haddon Goodman, Imaging Program Manager. He continued, “The REDIchip enables more sensitive quantitation for small molecules than traditional workflows using a robust and reproducible matrix-free environment.”

Protea’s REDIchip technology features were presented at Pittcon and the commercial product is expected to be available at the upcoming American Society for Mass Spectrometry (ASMS) conference this spring.  The commercial product will be compatible with a variety of MALDI systems, and it will allow rapid and reproducible sample analysis of small molecules by laser desorption ionization.