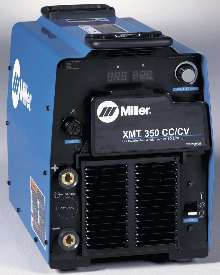 Compared to the ALT 304, which it replaces, "The new XMT 350 offers 24 percent more power, and that puts more parts in the bucket at the end of the day," says Jim Rappl, product manager, Miller Electric. "For example, the XMT 350 improves deposition rates up to 27 percent when running a .045-in. tubular wire, and it permits running longer secondary weld cables when wire welding on construction sites." The increased output voltage of the XMT-350 to 38 volts, enables more headroom for voltage drops across longer secondary weld cables and at the same time deliver the desired welding voltage to the arc.

Miller's unique Auto-Line technology provides three key benefits that improve performance: the ability to maintain a rock-steady arc despite primary power fluctuations within a 190 to 630V range; a primary power draw of just 17.8 amps at rated output on 460 VAC primary, which is a 25 percent advantage over competitive inverters; and the flexibility to accept any type of primary power (190 to 630V, single- or three-phase, 50 or 60 Hz) without any physical linking mechanisms.

Rappl says that, "whether they're aware of it or not, many companies have a problem with dirty power. This can cause welding parameters to go out of specification, nuisance trips or problems with re-linking mechanisms." Dirty power is the result of large loads starting on the same primary power line, utility brownouts or spikes, and generators that do not regulate auxiliary power voltage.

Auto-Line technology uses a "boost converter." This circuit boosts the primary input power-whether it's 208, 220, 240, 460, 575 V or anything in between-to a higher voltage. After being regulated, this power then becomes the source voltage for the actual inverter section of the power source (see Fig. 1). This ensures that the inverter has sufficient power as long as the primary power remains within a +37/-59 percent of the nominal 460V power.

Kurt Wollenberg, vice president of Performance Welding, a fabricator in Freedom, Wis., says, "The XMT 350 with Auto-Line technology definitely performs as advertised. It rode through voltage drops that shut down two other inverters on the same line (see Fig. 2)." In one instance, a tree fell across a power line and caused a sudden drop in voltage. In another, dirty power from the utility created a low voltage situation that exceed the standard ±15 percent operating window of non-Auto-Line inverters, causing them to shutdown for self-protection.

The Auto-Line circuitry also lowers primary power draw, which results in a near perfect power factor of .95 (1.0 is perfect). Drawing only 17.8 amps on 460V/three-phase primary, the XMT 350 permits using smaller fuses/breakers, smaller primary wiring and adding more welders to a facility without altering incoming service. Rappl adds, "The XMT 350's ability to run on one-fourth less current is also important on construction sites, which are usually starved for power."