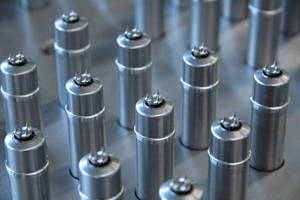 Designed for axial injection of small tubular parts, ThermoplayÂ® DN5/3 Series provides balanced filling that prevents flow lines and reduces risk of core pin bending caused by high injection pressures.Â Nozzles can also be used for direct lengthwise injection on walls of parts and feature symmetrically arranged tips that can be 3.2 mm (min) away from each other. Other multi-tip nozzles, DL-Syringe Series, are designed for edge gating and are suited for small parts or confined mold systems.


To Be Introduced to the U.S. Market by ALBA Enterprises at NPE2015, New Thermoplay® Nozzles Have Been Used in Europe to Mold Pen Barrels in Very High Cavitation Tooling

Designed by the Italian firm Thermoplay S.p.A., for which ALBA is the North American representative, Thermoplay® DN5/3 Series nozzles can be used for direct lengthwise injection on the walls of parts. They have symmetrically arranged tips that can be located at a minumum of 3.2 mm from each other. This makes the nozzles particularly suited for multi-cavity molding of small precisión parts with limited distance between their axes, or for small mold systems with extremely restricted áreas. The nozzles are also suitable for parts requiring a high degree of concentricity.

ALBA recommends the Thermoplay® DN5/3 Series nozzles for use with high-flow polymers such as ABS, polyethylene, polypropylene, and polystyrene.

Another multi-tip nozzle series from Thermoplay, the DL-Syringe Series, is designed for edge gating, with similar advantages for small parts or confined mold systems.