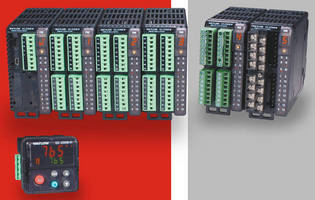 "The EZ-ZONE RM is extremely flexible and scalable allowing users to mix and match I/O to configure 1 to 152 loops of control and up to 256 monitor points. Because the controller is single-loop scalable, customers pay only for what they need - exact loop count," says Jim Hentges, Watlow product manager.

EZ-ZONE RM allows for many optional integrated controller functions to be combined together or ordered in different quantities, including: