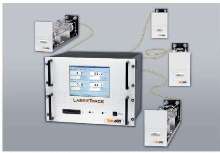 Warrington, PA (March 2003) Tiger Optics is pleased to introduce an oxygen module for its new LaserTrace, multi- point, mulit-species, multi-gas analyzer. This is the first oxygen analyzer based on a powerful, emerging technology known as Cavity Ring-Down Spectroscopy (CRDS), capable of measuring trace oxygen down to 500 parts-per-trillion (ppt), providing a fast, accurate, and easy-to-use means to detect contaminants.

The LaserTrace is capable of detecting many species such as H2O, O2, CH4, H2, CO, NH3, H2S, and HF. The O2 module measures down to 200 parts-per-trillion (ppt), in milliseconds, with absolute accuracy. Its ability too detect oxygen derives from breakthrough, patent-pending technology.

It is calibration-free, transportable, and requires very little maintenance. Designed by experienced instrument engineers, the LaserTrace combines high technology with plug-and-play operation, very modest maintenance, and freedom from calibration, along with built-in capacity to measure up to four sample gases.