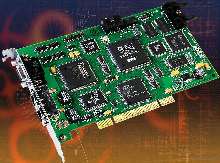 The XMP-SynqNet-PCI provides 100 Mbps, real-time, synchronous networking for up to thirty-two axes. Using SynqNet, servos can be updated as quickly as 20 kHz for four axes, or 10 kHz for eight axes. SynqNet also supports user-defined I/O CAN-based networking under common industry operating systems such as Windows NT, Windows 2000 and 95/98, VenturCom and VxWorks. Powered by a 32-bit floating point Analog Devices SHARC DSP, the heart of SynqNet is its modular MPI (motion programming interface) software which integrates into standard, object-oriented, C/C++ environments.

Along with the entire XMP family of controllers, the SynqNet PCI controller can now be programmed with the all-new MPX ActiveX libraries. With MPX, users can develop their own custom motion interface using LabView®, VisualBasic®, Excel®, VBScript and other environments that support ActiveX® controls, including other scripting languages.

More information about XMP-SynqNet-PCI and MPX can be obtained from Motion Engineering, Inc. at www.motioneng.com. Information on SynqNet technology can be found at www.synqnet.org.

All trademarks property of their respective owners.