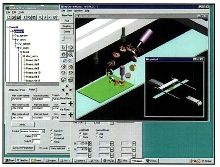 "Proprietary controller architectures are inflexible and offer inferior development environments," stated Dave Faulkner, executive vice president and managing director of motion control products. "We have several customers currently running CODE 6 with Core Motion in the field, including the world's fastest robot. This could only be achieved by allowing customer developed algorithms to be integrated into the software. CODE 6 with Core Motion technology provides our customers with a cost-effective solution and allows for flexibility, better performance and more programming choices than proprietary controllers."

Historically, machine OEMs who had transitioned from proprietary controllers to PC based motion control software had to use an intelligent motion card to augment the lack of PC performance. With the increasing power of PCs, Cimetrix's engineers utilizing Core Motion technology have moved the motion card functionality onto the PC, allowing for a direct connection from the PC to amplifiers and feedback devices. This enables the PC software to control trajectory generation, position loop, velocity loop, input/output scanning, and event generation at the servo rate.

Core Motion technology provides the same factory floor performance as high-end digital signal processing motion cards and is equipped with VenturCom's RTX real time extensions for Windows NT, NT Embedded, or 2000. In order to provide a connection from the PC to the motion subsystem, Core Motion utilizes analog interface cards or network connections to the drive amplifiers. Analog interface cards cost 50 to 75 percent less than intelligent motion cards, while network cards can drive this cost to $0. "Cimetrix CODE software continues to support motion cards from ACS, Anorad, Delta Tau, MEI, and Nyquist," added Faulkner. "Core Motion is the next step in a continual effort to provide OEMs with flexible solutions."

Due to the need for PC-based motion control software for less sophisticated motion applications, Core Motion will be made a stand-alone product to be released in early 2002. This will provide OEMs with a scaleable set of PC-based solutions: from two to three axis applications up to vision-triggered 30 axis machines. Core Motion will be programmable in C++, Visual BASIC, or programmable logic controller languages.