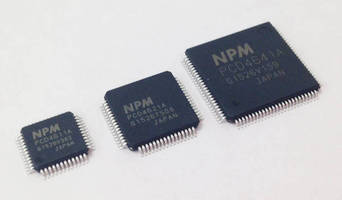 Series PCD46x1A features single-axis (PCD4611A), dual-axis (PCD4621A), and quad-axis (PCD4641A) models. With respective QFPs of 48, 64, and 100 pins, chip package and terminal allocation of all three modelsÂ are compatible with those of PCD46x1 series. Series PCD46x1A can also mount on same boards as previous chips. Functionality lets CPU connect to chips with 8-bit parallel bus connection or 4-wire serial interface. When connecting with latter, terminals D0–D5 can be used as GPIO ports.


RADFORD, Va. – Nippon Pulse has released a new line of PCD controller chips as an upgrade for the PCD46x1 series. The new PCD46x1A series includes updates and a few new features.

The new series contains three chips: the single-axis PCD4611A, the two-axis PCD4621A and the PCD4641A, a four-axis chip. The chip package and terminal allocation of all three chips remain the same as those in the previous series, with QFPs of 48 pins, 64 pins and 100 pins, respectively. They can also be mounted on the same boards as the previous chips.

New features include the capability for a CPU to connect to the chips with either an 8-bit parallel bus connection or a 4-wire serial interface; when connecting with the latter, terminals D0 through D5 can be used as general-purpose input/output ports.

The PCD46x1A series is available for all new applications as Nippon Pulse transitions away from the PCD46x1 series. The PCD46x1 chips will still be available for purchase as Legacy products through December 2017.

For more information about adjustments that have been made between the two series, check out the PCD46x1A user’s manual on the Nippon Pulse website. (Select Manuals & Literature from the top toolbar, and click the link for Controllers to get to the correct document.)