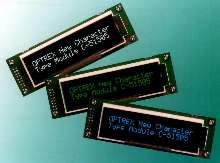 Plymouth, MI, November 2002 - The new C-51505 Series of 20 character x 2 line monochrome displays offers improved performance in an industry standard configuration and a striking appearance that allows design engineers to differentiate their products, all at a cost similar to standard LCDs.

C-51505 modules are backward-compatible to existing industry standard displays such as Optrex's DMC-20261 Series, but with a higher contrast ratio, wider operating temperature range, lower operating current, and higher luminance - all at a minimal cost differential. The use of the latest advancements in LED backlighting technology in the C-51505 Series permit a single chip to provide higher luminance with a substantially lower current draw (15mA compared with 130mA on displays like the DMC-20261).

Employment of a flat LC (liquid crystal) fluid permits the C-51505 modules to support 5V operation over the entire -20° to +70° C temperature range without the use of a temperature compensation circuit.