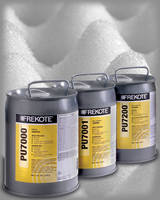 LoctiteÂ® FrekoteÂ® PU7000™ is designed for open cell or gloss surface foams, while PU7001™ release agent and PU7200™ mold sealer are suited for flexible polyurethane or semi-rigid polyurethane foams. Spray applied at temperatures from 95-149Â°F are thermally stable to 450Â°F and dry in 30 sec when exposed to ambient moisture at 110Â°F. Solvent-based polymers offer low mold buildup and minimal transfer during production of polyurethane foams and thermoplastic resins, coatings, and films.


Exceptional Performance on a Variety of Substrates, Including Polyurethane Foams and Thermoplastics

The three new Frekote® products are clear, solvent-based polymers that are spray applied at temperatures between 95°F and 149°F, drying in just 30 seconds when exposed to ambient moisture at 110°F. All three products are thermally stable to 450°F.

Henkel has created a detailed product brochure and website to provide information on the complete Loctite® Frekote® line. For more information, go to www.henkelna.com/frekote or call 1-800-LOCTITE (562-8483).

Henkel operates worldwide with leading brands and technologies in three business areas: Laundry & Home Care, Beauty Care and Adhesive Technologies. Founded in 1876, Henkel holds globally leading market positions both in the consumer and industrial businesses with well-known brands such as Persil, Schwarzkopf and Loctite. Henkel employs about 47,000 people and reported sales of $21.7 billion and adjusted operating profit of $2.8 billion in fiscal 2011. Henkel’s preferred shares are listed in the German stock index DAX.