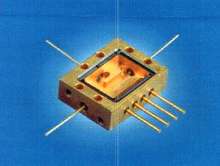 Direct Bond-HF Modules utilize glass-to-metal sealing and Kovar housings. They maintain signal performance throughout all high frequency conductors without moding due to resistance. Modules are suitable for switches and multifunction chassis assemblies utilized in radar, early warning and countermeasure systems. Temperature performances exceed commercial and military standards and hermeticity is offered at up to 1xE(-9) cc/sec@1atm.

HAMPSTEAD, NH, MARCH 21, 2003-Thunderline-Z has recently announced the launch of a new line of high performance direct seal modules. Direct Bond-HF modules are the latest development from Thunderline-Z's advanced Direct Bond technology approach. Direct Bond-HF modules are manufactured for circuit designs at high frequencies where signal performance is critical. Utilizing a proprietary glass-to-metal sealing technique, modules maintain signal performance throughout all high frequency conductors without moding due to resistance. This has been accomplished by optimizing the "skin effect" which has been the nemesis of circuit designers at higher frequencies for years.

"Our process reduces energy dissipation by decreasing the resistance path at higher frequencies. We've always been able to maintain low loss, but the Direct Bond-HF approach has allowed us to push the frequency envelope even further," said Jeffrey McCann, Engineering Manager at Thunderline-Z. These modules solve a major problem for engineers who need high integrity signals in the K-band, as well as the V-band region.

The modules are manufactured using Kovar housings and Thunderline-Z's proprietary Direct Bond glass and pin design. They are ideally suited for high performance military and commercial designs such as switches and multifunction chassis assemblies utilized in radar, early warning and countermeasure systems, and communication jammers. Temperature performances
exceed commercial and military standards and hermeticity is offered at up to lxE(-9)cc/sec@latm.

About Thunderline-Z:
ThLunderline-Z is a full service manufacturer of hermetic feedthrus, soldered packages, and direct sealed packages. Recently acquired by Emerson (gotoemerson.com), they are the leading supplier of feedthrus to the Commercial, Hi-Rel,
Aerospace, Medical, Wireless Conmunication, and Microwave Industries

About Emerson:
St Louis-based Emerson (gotoemerson com) is a global leader in bringing technology and engineering together to provide innovative solutions to customers in process control, electronics and telecommunications, industrial automation, heating, ventilating and air conditioning, and appliance and tools Sales in fiscal 2002 were $13.8 billion
Share