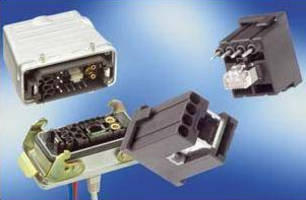 Suited for industrial environments, Model C146M RJ45 Interface features housing that can accommodate up to 5 components alongside RJ module. Plastic body of module fixes and secures standard RJ45 components, while aluminum die-cast housing guarantees protection to IP65. Female connectors are spring bedded and, under intense mechanical stresses and vibrations, transmittance remains 100% without interruption or failure, in conformance with CAT5 standards.


The RJ Module for the Modular Connector System

Amphenol-Tuchel Electronics presents its new RJ45 Interface from the RJ Module, made principally for industrial environments. Series C146's modular system together with the RJ Module offers added diversity to the 14 current modules. As a result, the user has the ability to connect their own application to the pre-cut connector themselves, precisely as they desire. The housing can accommodate up to 5 further components alongside the RJ module. In the future, it will also be possible to transmit power and control signals, real time data and compressed air.

The plastic body of the RJ Module fixes and secures the filigree standard RJ45 components while the aluminium die-cast housing guarantees protection class IP65. The RJ45 female connectors are spring bedded, according to a patented principle, in order to tolerate stresses on a par with the housing and enclosure. Even under intense mechanical stresses and vibrations, the transmittance will remain 100% without interruption or failure, conforming to the standard CAT 5 warranty (ISO/IEC 11801 connecting hardware.)

Standard RJ45 cable and components are specially adapted for the cabling and can be enclosed in the module without the use of tools, thus allowing a quick and cost-effective assembly on site. In turn, the use of the standard components enables the purchasing department inexpensive costs and quick delivery. Four additional contact chambers in the RJ Module permit assembly with standard power-rated contacts from Amphenol. This allows the module to be used independently as both a data and standard connector.
Share