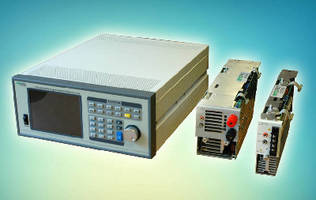 Featuring 6-slot design, ML1800 Series can be specified with up to six 300 W or three 600 W modules. Modules offer current ratings of 60/120 A with voltages up to 80, or 10/20 A with voltages up to 500 V. Equipped with 8 in. TFT color LCD, loads provide CC, CV, CR, CP, short circuit, battery, and LED operating modes. Units offer 16-bit programming and measurement resolution, as well as 20 kHz transient test speeds with programmable rise, dwell, and fall times.

The 16-bit programming and measurement resolution lets the ML1800 be operated as standalone instrument as well as having the capability to be integrated into a larger test system. It offers 10 User programmable stored test sequences of up to 10 steps each. Programs can be run once, continuously looped or run once and then chained to other programs to provide very complex loading profiles.

A major advantage to users of the ML1800 load series is the ability to change test modes without turning off the load input. This allows the ML1800 series to more accurately simulate load testing applications. Turn-on capacitance and inductance simulation is easily performed using the CC Rise and CV Rise modes. In addition, the load’s LED mode and Battery simulation functions allow for quick setup and execution for these power products. The CC to CV and CR to CV functions also provide the user with special loading simulation features.

Simon Tanner, European Sales Manager of INTEPRO SYSTEMS comments, “The ML1800 is one of the most cost effective electronic loads on the market. The modular design and clear, colourful display makes it easy to see the status of every load whether as a stand-alone instrument or in a test system.”

Since 1981 Intepro has supplied users and manufacturers all over the world ATE systems to test power electronics used in a wide range of applications. Our knowledge and expertise in moving and measuring power makes our system unparalleled for production testing, ESS screening, repair and characterization of power components and sub-assemblies used across all industries.

Intepro Systems manufactures, develops and services complex instrumentation and systems for the test and design validation of power supply systems and their components used in aerospace, military, telecommunications, and other power electronics applications. Leaders in power supply testing; the company has a global reach with direct sales offices in the U.K., Ireland, China and the USA, and distributors covering the rest of the world.
Share