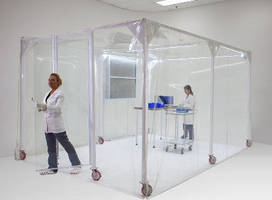 The free-standing EZ-UP cleanroom installs in a matter of hours. After construction of the steel frame, the plastic panels are connected, surrounding the outside of the frame to create a controlled interior. The ceiling grid is also made of steel in order to support modules that could include lighting and HEPA fan/filter units. A centralized power distribution module delivers electricity to modules. Rooms support positive or negative pressure.

The EZ-UP cleanroom can be used as a typical free-standing classified room, or as a frameless enclosure designed for field or temporary use such as forensics or patient isolation. The easily-transportable room inflates by connecting the RH-welded plastic enclosure to a source of clean air. A third option for the versatile EZ-UP is as an equipment cover suspended from the ceiling and lowered over process equipment.