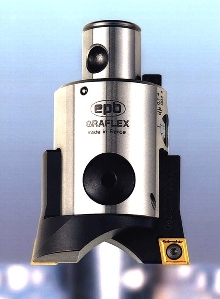 Warren, Mich., November 28, 2001 -- Carboloy Inc. has announced its new and improved Graflex® modular boring system -- the Multifunction II -- with one series of boring heads designed to handle a size range of .700 in. to 8 in. The Multifunction II combines the features of the two previous EPB rough boring designs into one new A750 universal style replacing the A700 multifunction type and A770 independent setting type.

* Higher productivity due to increased rigidity

* One dial adjustment to simultaneously set both blades

* Identical insert holders for symmetrical use

Graflex toolholders offer high precision and rigidity in all configurations. The modular system combines a wide array of standard toolholders and cutting tool units, along with a simple self-locking connection to meet requirements for specialized boring operations. A central screw and a stator nut are assembled to hold both the insert holders in place and to lock them down firmly against the boring head body. The ledge under the insert provides additional support during heavy cutting as it comes in contact with the upper ground surface of the boring head. Graflex system components are quickly and easily assembled for fast setups, and all cutting tool units use standard Seco-Carboloy inserts.