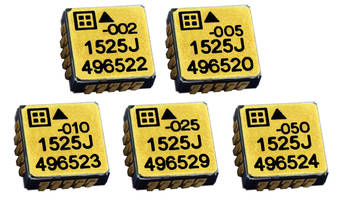 Carefully regulated manufacturing processes ensure that each sensor is made to be virtually identical, allowing users to swap out parts in the same g range with few-to-no testing modifications, further saving time and resources. This provides test engineers with a quick plug-and-play solution for almost any application, with total trust in sensor accuracy when used within published specifications. As the OEM of its own MEMS capacitive accelerometer chips and modules, Silicon Designs further ensures the manufacture of consistently high-quality products, with full in-house customization capabilities to customer exacting standards. This flexibility ensures that Silicon Designs can expeditiously design, develop and manufacture high-quality standard and custom MEMS capacitive accelerometers, yet still keep prices highly competitive.

Since 1983, the privately held Silicon Designs has served as leading industry experts in the design, development and manufacture of highly rugged MEMS capacitive accelerometers and chips with integrated amplification, operating from its state-of-the-art facility near Seattle, Washington, USA. From the company’s earliest days, developing classified components for the United States Navy under a Small Business Innovation and Research (SBIR) grant, to its later Tibbetts Award and induction into the Space Technology Hall of Fame, Silicon Designs applies nearly 35 years of MEMS R&D innovation and applications engineering expertise into all finished product designs. For additional information on the Model 1525 Series or other MEMS capacitive sensing technologies offered by Silicon Designs, visit www.silicondesigns.com.

Silicon Designs was founded in 1983 with the goal of improving the accepted design standard for traditional MEMS capacitive accelerometers. At that time, industrial-grade accelerometers were bulky, fragile and costly. The engineering team at Silicon Designs listened to the needs of customers who required more compact, sensitive, rugged and reasonably priced accelerometer modules and chips, though which also offered higher performance. Resultant product lines were designed and built to surpass customer expectations. The company has grown steadily over the years, while its core competency remains accelerometers, with the core business philosophies of “make it better, stronger, smaller and less expensive” and “let the customer drive R&D” maintained to this day.