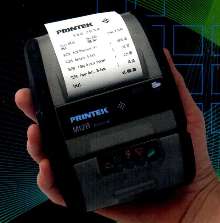 Mt2 Printer is Rugged, Easy to Wear, and Bluetooth Capable

BENTON HARBOR, MI - Printek, Inc. announces the release of its second series of mobile thermal receipt printers, the Mt2 Series. The Mt2 is an ultra-lightweight two-inch mobile thermal printer. It features a protective thermoelastic overmold for extra tough durability, and is well suited to meet the rigorous demands of mobile printing applications. The clamshell print-head design allows for quick and easy paper loading. A Bluetooth wireless connectivity option allows for "natural" operation, while an RS-232 Serial Interface, and Fast IrDA with robust optical communication are standard. The Mt2 weighs only 16oz, and it is comfortable enough to carry for an entire work shift.

"We are very excited about the launch of the Mt2", says Chris Yeager, Marketing Manager for Printek. "The Mt2 is the second mobile printer in the past 6 months that we've launched with plans to introduce even more models over the next year." Yeager continued, "Soon after the Mt2 is launched, we will be rolling out a 4" mobile thermal printer that will have many unique features that truly distinguish it from the competition."

The Mt2 can be used with most portable computing platforms and form factors including ruggedized notebooks and pen-pads, handheld and Palm computers operating Windows CE, Pocket PC, EPOC and Palm operating systems. When coupled with wireless enabled mobile computers, the Mt2 is perfect for point-of-service and point-of-sale applications that demand payment at the time of delivery.

Printek is recruiting a select group of channel partners to sell the Mt2. Software developers, value added resellers, and system integrators who offer mobile computing solutions in route accounting, hospitality and restaurant, retail point-of-sales and service, and law enforcement are invited to call the company to discuss its reseller program. Printek offers a low cost, risk-free trial of a Developers Kit that includes everything required to get the Mt2 up and running quickly.

About Printek, Inc.
Printek, Inc., established in 1980, designs and manufactures industrial printing solutions. The company's products include mobile and stationary print stations for shipping, invoicing, labeling, and financial and manufacturing control documents. Printek has an installed base of over 30,000 print systems with major customers including Avis, Ford, UPS, American Airlines, Department of Defense, and Staples. All Printek printers are designed to withstand industrial use and carry a one-year warranty.