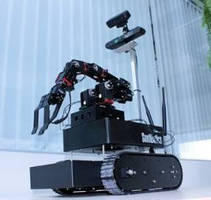 "This new version of the SentiBotics robotics kit contains not only substantial improvements to existing features but additional functionality as well," said Dr. Povilas Daniusis, Neurotechnology robotics team lead. "These new capabilities not only can save time and effort for developers of mobile manipulation control systems, they also enable SentiBotics to serve as an educational platform for use at universities."

The new SentiBotics Development Kit 2.0 includes motion planning software and accurate 3D models of the robot, enabling the robot to grasp and manipulate objects while avoiding obstacles. The 3D object recognition and object grasping system also allows the robot to grasp arbitrarily-oriented objects. In addition, Neurotechnology has added the ability to use a simulation engine that enables robotics developers towork in virtual environments.

--  Object delivery - The robot navigates through its previously-mapped locations until it reaches a location where an assigned object was previously recognized. The robot tries to directly recognize the assigned object and will reposition itself until recognition occurs and grasping is possible. The object is then grasped using the robotic arm, placed into the attached box and delivered to a place where the delivery command was given.

--  Object grasping in occluded scenes - The SentiBotics robot can perform path planning for its manipulator, avoiding obstacles that might be between the recognized object and the manipulator itself. If necessary, the robot can automatically reposition itself in order to perform the grasping task. For example, the robot can drive closer or reorient its angle to the object such that it is in the optimal position for picking it up. The SentiBotics robot can automatically determine an object's orientation and arrange its manipulator in a way best suited for grasping a particular object according to that object's position in space.

--  Support for simulation engine - Enables the development and testing of robotics algorithms in simulated environments, which can reduce development time.

--  Tracked mobile platform - Includes motor encoders and an inertial measurement unit (IMU), capable of carrying a payload of up to 10kg.

--  Modular robotic arm with seven degrees of freedom - Based on Dynamixel servo motors, capable of lifting objects up to 0.5kg. Each motor provides feedback on position, speed and force.

All platform components can be easily obtained from manufacturers and suppliers worldwide, so robotics developers and researchers in private industry, universities and other academic institutions can use SentiBotics as reference hardware to build their own units or to incorporate different platforms and materials.

--  Details of all algorithms used, including descriptions and code documentation.

--  ROS-based infrastructure - Allows users to rapidly integrate third-party robotics algorithms, migrate to other hardware (or modify existing hardware) and provides a unified framework for robotic algorithm development. SentiBotics 2.0 is based on the ROS-Indigo version.

--  Step-by-step tutorial - Describes how to setup the robot, connect to it and test its capabilities.

--  Demonstration videos and code samples (C++ and Python) - Can be used for testing or demonstration of the robot's capabilities, including how to:

-  Drive the robot platform and control the robotic arm with the control pad.

-  Build a map of the environment by simply driving the robot around and use this map for autonomous robot navigation.

-  Teach the robot to recognize objects.

-  Grasp a recognized object with the robotic arm, including cases where the grasping scene contains obstacles.

-  Deliver an object that is located in a previously-visited place.

SentiBotics and the entire line of Neurotechnology products for AI, robotics, object recognition and biometric identification are available through Neurotechnology or from distributors worldwide. For more information, go to: www.neurotechnology.com.

Drawing from years of academic research in the fields of neuroinformatics, image processing and pattern recognition, Neurotechnology was founded in 1990 in Vilnius, Lithuania and released its first fingerprint identification system in 1991. Since that time the company has released more than 130 products and version upgrades for identification and verification of objects and personal identity.