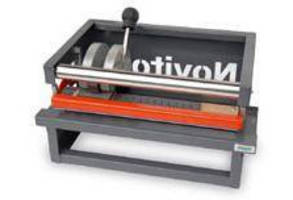 Manually operated without aid of electricity or air pressure, NovitoolÂ® PUN M(TM) punches fingers into PU and PVC conveyor belts in preparation for installing vulcanized splices. Design facilitates on-location setup and use, and 50 kN punching force is created by lever pulled with one hand. Available in standard widths of 12, 24, and 36 in., punch weighs 55, 66, and 77 lb, respectively, and features open construction that enables punching wider belts in multiple steps.


The PUN M is designed to effortlessly punch fingers into PU and PVC conveyor belts in preparation for installing vulcanized splices. Depending on the desired finger dimensions, we offer a variety of punchboards for the PUN M. Punchboards are sold separately.