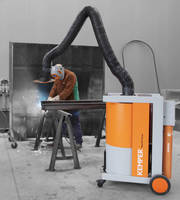 Able to be maneuvered by hand, MaxiFil CleanÂ protects against welding fumes by collecting pollutants at their point of origin. Flexible extraction arm comes in lengths up to 4 m and allows use in different positions, while filter is integrated as cartridge, has area of ~15 mÂ², and cleans itself automatically during operation. More than 99.97% of welding fumes containing respirable dusts <10 Âµm is separated. After filtering, unit automatically feeds dust particles to disposable cartridge.


• Suitable for extraction of large volumes of welding fumes

Vreden — Mobility and protection against large volumes of welding fumes at the same time: With MaxiFil Clean, KEMPER GmbH adds a system with cleanable filter to its portfolio of mobile extraction and filter units. The unit ensures effective collection of pollutants at their point of origin. With MaxiFil Clean, KEMPER is the first manufacturer to take the entire pollutant cycle into account beyond extraction and filtering. The company has applied for a patent for its unique contamination-free dust disposal system in cartridges. Initial use of the extraction and filter unit in plants has already been met with a positive reaction.

“With MaxiFil Clean, plants that work with metal ensure a high standard of work safety for their employees,” emphasises Björn Kemper, managing director of KEMPER-GmbH. “Apart from the extraction and filtering of large volumes of pollutants, our new system guarantees their safe and reliable disposal out of the filter unit.”

Thanks to its easy manoeuvrability by hand, MaxiFil Clean can be put to use at different welding stations, and its flexible extraction arm allows it to be used in different positions. The arm is available in lengths of up to four metres. Owing to the size and the special shape of the extraction hood, the KEMPER technology allows the collection of up to 40 percent more welding fumes than conventional extraction hoods. “This means welders don’t have to re-position the extraction hood as often. That guarantees more convenient handling and higher acceptance among employees,” explains Kemper. The extraction hood can be rotated 360 degrees. The arm is self-supporting and remains in the position the welder places it.

In contrast to conventional mobile welding fume filter units, MaxiFil Clean is suitable for permanent use where large volumes of welding fumes occur. This is possible because of the cleanable filter. Integrated as a cartridge, it has an area of around 15 square metres and cleans itself automatically during operation. “This process makes the unit highly efficient,” explains Kemper. More than 99.97 percent of the welding fumes – containing the respirable dusts smaller than 10 µm – is separated out. Moreover, the permanent monitoring of the filter provides the welder with more security.

After filtering, the unit automatically feeds the dust particles to an easy-to-seal disposable cartridge. This way, in contrast with conventional solutions, users don’t even come into contact with the pollutant-containing particles when disposing the dust. KEMPER has applied for a patent for this technology.

The unit can also be used when welding chrome-nickel steels. MaxiFil Clean is currently undergoing IFA certification. An integrated spark pre-separator prevents large dust particles and sparks from finding their way into the filter and extends its service life. Automated starting and stopping as well as an LED lamp can be optionally integrated into the extraction hood. This provides optimum illumination for the weld seam, and ensures better acceptance among welders, and improved re-positioning.

Only a short time after introduction onto the market the MaxiFil Clean welding fume filter unit has met with a positive reaction among users. KEMPER has already shipped out around 100 of the new systems to several countries. MaxiFil Clean was recently distinguished for its excellence as technological innovation at the STOM Tool trade fair in Kielce, Poland.

KEMPER GmbH is a family SME based in the Westphalian town of Vreden. The company's product groups include the extraction and filter technology. These include, among other things, highly efficient filtration systems that filter out even ultrafine particulate matter from the air, extraction tables for cutting processes and the entire accessory range when it comes to occupational safety and air pollution control for the metalworking, as well as for the electrical and automotive industries. In its products and services KEMPER GmbH follows the guiding principles of sustainability, simplicity and innovation. KEMPER is world leader in the field of extraction and filtration systems for the metalworking industry. The company was established in 1977 and currently employs about 300 workers. In addition to its headquarters in Vreden, KEMPER has another production facility in Prague (Czech Republic). The company is represented worldwide by eight offices and numerous appointed agents.
Share