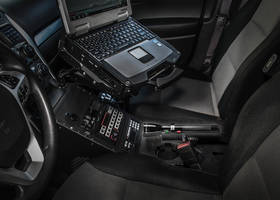 Designed with both first responders and civilian users in mind, the 1,000-lumen MAGLITE® ML150LR™ rechargeable flashlight features 450 meters of beam throw, in a mid-size format.

Mag Instrument, Inc., the world leader in flashlight technology, will introduce its most powerful flashlight yet -- the rechargeable ML150 LR™. Despite its mid-size (C-cell format) dimensions, the ML150LR™ generates a stunning 1,000 lumens and achieves a beam distance of over a quarter-mile. And thanks to multiple power settings and critical efficiency innovations, it can run for up to 75 hours on a single charge of its state-of-the-art Lithium Iron Phosphate (LiFePO4) battery.

In achieving this performance milestone, Mag Instrument's research and development team started by tackling a long-known problem: An LED light engine must be kept cool to run efficiently, and poor heat dissipation is a serious performance-limiting factor with high-output LEDs. The solution, newly patented by Mag Instrument, is an integral heat-sinking technology that quickly drains heat from the LED.

According to Tony Maglica, president and founder of Mag Instrument, "The new MAGLITE® ML150LR™ is the first flashlight to embody this new heat sink technology, and the performance results are spectacular – a real breakthrough. But still, let's not forget optics. While many flashlight brands tout their high lumen outputs, that doesn't get you very far unless you also have the superior beam-forming optics needed to shape all that light into a versatile, focusable and effective beam that puts the light where the user needs it. A flashlight should be a powerful, manageable, durable, dependable portable light source that is long-lasting. This new flashlight checks all the boxes magnificently."

Other standard features of the ML150LR™ include:

Check out the legendary MAGLITE® flashlights, known for their unsurpassed quality, performance and durability, including the ML150LR™. Learn more at: http://maglite.com/.