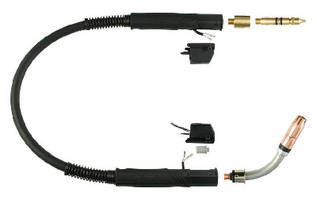 Available on TOUGH GUN Air-Cooled Semi-Automatic 350-650 A MIG Guns, Double-Life MIG Gun System features identical connections on front and back ends of MIG gun. When front end or cable becomes worn, welding operators can remove trigger switch, trigger housing, and gooseneck and flip-flop them to back end. This change results in new components at front end of gun and worn components at back by feeder, doubling life of MIG gun.


Windsor, Ontario. - To help companies increase the life of their MIG guns and reduce costs associated with replacements, Tregaskiss(TM) offers its unique Double-Life MIG Gun System. Exclusive to the Tregaskiss TOUGH GUN(TM) Semi-Automatic Air-Cooled MIG Guns, this system features identical connections on the front and back ends of the MIG gun. When the front end or cable becomes worn, welding operators can remove the trigger switch, trigger housing and gooseneck and flip-flop them to the back end. Welding operators simply remove the power pin, power pin adaptor and terminal housing at the back end of the gun, and move it to the front of the MIG gun. This change results in new components at the front end of the gun and worn components at the back by the feeder, and it doubles the life of the TOUGH GUN MIG Gun.

The Double-Life MIG Gun System is available on TOUGH GUN Air-Cooled Semi-Automatic 350- to 650-amp MIG Guns. These MIG guns also feature lifetime warranties on the handles and switches, and include the Tregaskiss Common Consumable Platform, which features the TOUGH LOCK(TM) Consumable System. This system consists of TOUGH LOCK Contact Tips and Retaining Heads with Dual Taper Technology, as well as the QUICK LOAD(TM) Liner system. The TOUGH LOCK Consumable System operates at cooler temperatures than many competitive consumables, minimizing downtime and cost for changeover and replacements.

Additionally, the Tregaskiss QUICK LOAD Liner system allows a new full-length liner to be installed from the front end of the MIG gun, requiring less than half the time of a conventional liner replacement and further reducing costs.