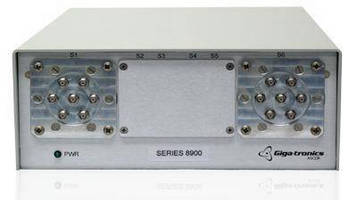 Measuring 2U tall, Series 8900 supports relays of various sizes from 1 x 2 up to 1 x 12, either terminated or un-terminated. Relays can be removed from front without opening box. Internal firmware keeps track of switch actuation counts on each pole stored in non-volatile memory, allowing user to compare actual use to predicted life of relays. Supporting GPIB or LAN interfaces, rackmount/benchtop unit provides series of LEDs on front panel to indicate closure status of relays.

o Wide variety of Available Relays - While being only 2U tall, the 8900 series is configured to support relays of various sizes from 1x2 up to 1x12 either terminated or un-terminated types. In addition, the 8900 is designed to support two families of relays, one for ultra-high reliability for high use applications, and the other focused on lower use applications at reduced cost. This provides the utmost in flexibility in providing a switching system that meets the customer's requirements for cost, reliability and configuration.

o Customizable Front Panel - Both the 8901 and the larger 8902 have a removable front panel which can easily be reconfigured to meet the customer's specific requirements. This allows customers to design their own switching system using the relays they need in the positions they prefer.

o Serviceability - Relays can be removed from the front without opening the box. The relays are connectorized on the rear allowing them to be replaced quickly, minimizing meantime to repair (MTTR).

o Switch Closure Counting - The internal firmware keeps track of switch actuation counts on each pole stored in non-volatile memory. This allows the user to compare his actual use to predicted life of the relays allowing him to anticipate failures, or even replace relays near end-of-life before failures occur. In addition, this feature can be used to optimize test procedures to level the number of cycles on each switch position.

o Interfacing -The 8900 family supports GPIB or LAN interfaces allowing the customer to use whichever he prefers.

o Rackmounting options - The 8900 family offers two rackmount options, the first consists of standard rackmount ears that place the faceplate of the switching panel at the front of the rack, making all of the cables and connectors available to the user. The second option is a set of extended rackmount ears which recesses the faceplate of the switching panel back into the rack. In addition, a user-configurable faceplate is provided allowing the user to mount I/O connectors as needed. The space between the configurable faceplate and the original faceplate allows for the relays to be interconnected in a protected area and also allows for placement of small microwave components such as directional couplers, splitters, combiner, attenuators, etc.

o Optional LED Switch Indicators - The 8902 box provides a series of LEDs on the front panel to indicate the closure status of the microwave relays. This feature is useful during program integration as a confirmation of which position the relays are in.

"Customers in the Aerospace Community are looking for an inexpensive alternative to microwave switching that provides both flexibility and re-configurability. Test Engineers are often pressed to design test hardware in parallel with product development, forcing them to accommodate last moment changes in test configuration. Fixed RF Interface Unit (RFIU) designs by their customized nature, suffer from a lack of re-configurability. The 8900 family allows the incorporation of a Microwave Switching solution early in the test system development which can easily be modified to accommodate either changes in the Unit Under Test, or in the test plan itself. Giga-tronics has worked extensively with its customers to understand their needs, and provide a solution which meets or exceeds" said Robert Waldeck, VP of Business Development for Switching Solutions.

Founded in 1980, Giga-tronics Incorporated is a publicly held company, traded on the NASDAQ Capital Market under the symbol "GIGA". Giga-tronics is a leading engineering and design manufacturer of best-in-class RF and microwave signal generators, power amplifiers, power meters, and USB power sensors and broadband switching matrices, all designed and manufactured in the USA. Research and Development production and calibration managers, scientists, engineers and technicians around the world use Giga-tronics test equipment and realize higher productivity and greater ease of use in many applications: ATE systems, aerospace and defense communications and general component test. URL: www.gigatronics.com.