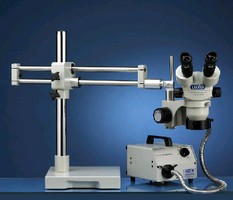 Featuring heavy-duty aluminum housings, System 273 Binocular and System 373 Trinocular Microscopes come standard with 10x, 23 mm widefield eyepieces and eyeshields, and rotate 360Â° in their focus mounts. Both units have zoom range of 0.7-4.5, giving them magnification range of 7-45x. Zoom ratio of 7:1 is adjusted via dual graduated control knobs located on side of head. Microscopes can be used with single boom stands or dual boom ball-bearing stands.

Field of view is increased when viewed through the eyepieces of the System 273 and System 373 microscopes. Versus the traditional System 250 and System 350 microscopes, Luxo's 23mm line offers 15% greater viewing area.

The smaller, sleeker body of System 273 and System 373 microscopes occupy a lesser footprint on the worksurface. Working distance is 2" greater than that of traditional Binocular and Trinocular scopes when used with a 0.5X reducing lens. This increased working distance not only provides additional space for operator maneuverability, but also decreases the chance that products may become damaged during inspection.

Construction and Finishes:
System 273 and System 373 microscopes have heavy-duty aluminum housings and come standard with 10X, 23mm widefield eyepieces and eyeshields. The microscopes rotate 360º in their focus mounts. Both Binocular and Trinocular models have a zoom range of 0.7 to 4.5 giving them a magnification range of 7X to 45X. The zoom ratio of 7:1 is adjusted via dual graduated control knobs located on the side of the head. System 273 and System 373 microscopes can be used with Luxo single boom stands or dual boom ball-bearing stands.