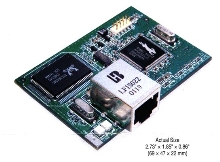 Davis, Calif., May 17, 2002 - The new RCM3000 RabbitCore is Rabbit Semiconductor's most powerful and feature-packed microprocessor core module. Powered by the new Rabbit 300(TM) - the "EMI-Free microprocessor" - the RCM3000 is the ideal option for designers who want to rapidly develop and implement embedded systems with fully integrated Ethernet connectivity. RabbitCores mount directly on a user-designed motherboard and act as the controlling microprocessor for the user's system.

Available in two models, the RCM3000 is equipped 10Base-T Ethernet, up to 512K each of Flash and SRAM, quadrature encoder inputs, PWM outputs, and pulse capture and measurement capabilities. Two 34-pin connection headers provide 52 digital I/O shared with the 6 serial ports. The integrated Ethernet port allows instant local or worldwide connectivity, and a pin-compatible RCM3100 without Ethernet is available for parallel development and cost-effective implementation of both Ethernet and non-Ethernet systems.

Programs are developed with our industry-proven Dynamic C® development system, a C-language environment that includes an editor, compiler, and in-circuit debugger. Efficient hardware and software integration facilitates rapid design and development. User programs can be compiled, executed, and debugged using Dynamic C and a programming cable-no in-circuit emulator is required. An extensive library of drivers and sample programs is provided, along with royalty-free TCP/IP stack with source.

RCM3000 models are available May 17 and are priced from $39 (qty. 1000). A complete RCM3000 Development Kit is priced at only $299 and includes RabbitCore module (RCM3010 with 256K Flash/128K SRAM), prototyping board, AC adapter (U.S. only), serial cable for programming and debugging, Getting Started manual, and complete Dynamic C SE software development system (not a trial version) with royalty-free TCP/IP and documentation on CD-ROM. 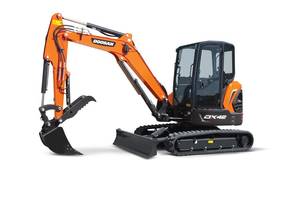